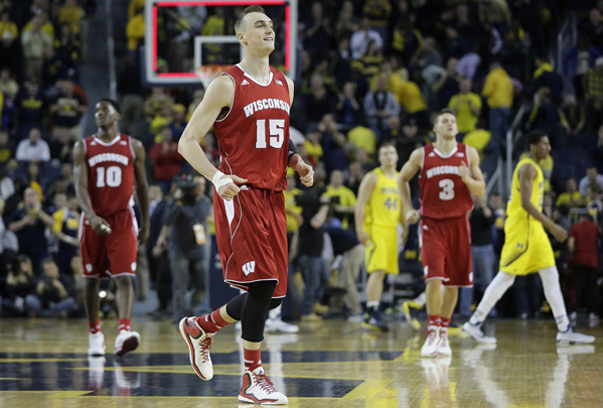 The Big Ten is sending half of its teams to the 2015 NCAA tournament, as seven of the league’s 14 teams were selected into the field of 68. Each of those teams also avoided the play-in games in Dayton, setting up match-ups on Thursday and Friday across the United States.

Wisconsin holds the highest seed out of any Big Ten team as the league’s regular season and tournament champion. At 31-3, the Badgers earned a No. 1 seed in the West region and get to play in Omaha, Neb., to open the tournament. Michigan State has become a trendy Final Four pick after its Big Ten tournament run and faces Georgia in the second round with a chance at playing Virginia in the round of 32. And Purdue, with a win over Cincinnati, could face undefeated Kentucky. Those are some of the storylines the Big Ten faces in the round of 64.

Below is a look at each Big Ten team’s opening matchup in the NCAA tournament:

With their Big Ten tournament title, the Badgers earned a No. 1 seed in the NCAA tournament and the right to play Coastal Carolina, a team that finished third in the Big South Conference, in the second round in Omaha. And the Badgers are big favorites for this one. The Chanticleers come into this game with a defense not particularly known for having great success — it ranks No. 162 in the nation in defensive efficiency at 1.02 points per possession allowed per game, and it will be going against the country’s No. 1 offense in Wisconsin.

Coastal Carolina also will have to deal with Wisconsin’s major size advantage, as the Badgers rank No. 5 in the country in effective height compared to the Chanticleers, who rank No. 301. And that could have a major impact on the perimeter, which the Chanticleers already struggle in defending (33.1 percent of opponent’s points come from 3s already). Both teams, though, don’t turn the ball over often and also don’t force many turnovers, and it’s likely this game will be played to a very slow pace. KenPom: Wisconsin 73, Coastal Carolina 56

After earning a 27-6 record with wins over NCAA tournament teams Iowa State, Oklahoma State, Michigan State (twice), Indiana (twice), Purdue and Wisconsin, the Terrapins were rewarded with a No. 4 seed — lower than they anticipated — and with a matchup against 28-5 Valparaiso in Columbus, Ohio. And outside of the advantage the Crusaders have of playing closer to home, the Terrapins also have to face a team that has a 6-1 record this season against opponents rated in the KenPom top 100.

This game won’t be easy for the Terps. The Crusaders defend the paint very well and don’t let opponents get to the line often — a part of the game that Maryland thrives on. And Valparaiso ranks No. 47 in offensive rebounding percentage (rebounding 35 percent of its misses), something Maryland has struggled with all season, as well. Both teams also possess similar size, making Friday afternoon’s game a must-watch. KenPom: Maryland 63, Valparaiso 60

As much as an up-and-down season the Spartans have had, they again appear to be peaking at the right time under Tom Izzo. Since a Jan. 24 loss at Nebraska, the Spartans are 10-4 with wins against Ohio State, Purdue, Indiana and Maryland. And in the Big Ten tournament, they advanced to the final and took Wisconsin to overtime. But because of that early loss to Nebraska and an even earlier one to Texas Southern, the Spartans at 23-11 find themselves facing Georgia, a team that finished 21-11 and 11-7 in the SEC with losses this season to the likes of Auburn and Georgia Tech.

But the Bulldogs are not a walkover opponent for the Spartans by any means and could cause plenty of problems as the country’s No. 7 team at getting to the free throw line at a 47.8 percent free throw rate. And troubling for Michigan State is that it allows opponents to get to the line at a 37.7 percent rate, too — ranking No. 199 in the country. That said, the Bulldogs don’t shoot particularly well from the line and from the field and rely on free throws for many of their points, but if they get hot and get to the line often, the Spartans could be in trouble. KenPom: Michigan State 66, Georgia 64

According to KenPom, the Hawkeyes are anticipated to play in the most exciting Friday matchup of the second round of the NCAA tournament. Their opponent: the Davidson Wildcats, who hold the nation’s No. 8 offense in scoring efficiency. The Wildcats finished the regular season with a 24-7 record, but losses to St. Joseph’s and St. Bonaventure and a semifinals exit from the Atlantic 10 tournament led to a No. 10 seed. And the Hawkeyes, who had won six straight, did not do themselves any favors by losing to Penn State in the Big Ten tournament.

It leads to a matchup between two offenses ranked in the top 35 in the country — the Wildcats particularly known for their shooting prowess, especially from behind the arc, and the Hawkeyes regarded for their offensive rebounding and free throw rate. Both teams also like to run their offenses at a quick rate, which makes this game have the potential of being very high scoring and very easy on the eye to watch. KenPom: Iowa 75, Davidson 73

The winner of this game gets the likely honor of facing No. 1 seed and undefeated Kentucky, but both teams have gone through a lot to get to this point in the first place. The Boilermakers struggled early this season with losses to North Florida and Gardner-Webb and had to find their true identity, which Matt Painter has helped them find as a team that uses its physicality in the paint — from its guards driving to its big men posting up — to its advantage. The Bearcats, meanwhile, dealt with a coaching change mid-season as Mick Cronin announced in early January he would not be on the sidelines for the remainder of the season due to lingering health issues.

Since those two turning points, though, the Boilermakers are 13-7 following the loss to Gardner-Webb and the Bearcats are 15-8 since Larry Davis took over as the interim coach. On the court, though, both teams have trouble in turning the ball over and allowing offensive boards, and while Purdue’s offense ranked tops in the Big Ten at getting to the free throw line the Bearcats ranked first in the American Athletic Conference in not allowing opponents to get to the line. And while Cincinnati had the AAC’s second-best eFG% at 52.5 percent in league play, the Boilermakers led the Big Ten in eFG% defense at 44.2 percent. In short, on Thursday night, something will have to give. KenPom: Cincinnati 61, Purdue 59

Despite their 23-10 record, the Buckeyes were handed a No. 10 seed in the NCAA tournament, potentially due to just three wins against teams in the NCAA tournament field. As a reward for that, they have to travel across the country to Portland, where they could face No. 2 seed Arizona in the third round. But first, the Buckeyes will have to go through a surging VCU squad led by Shaka Smart, a team that has won five straight games heading into Thursday’s game.

Both teams obviously pride themselves on their defense — each ranking in the top 40 in the nation and each ranking in the top 25 in forced turnover percentage. But each team will face challenges of its own, as the Buckeyes will have to take extra care of the ball and not allow VCU to score often from the perimeter. And the Rams will have to keep Ohio State off the boards and find ways to score inside. It all makes for an intriguing matchup — one that KenPom rates as the most exciting on Thursday’s slate of games. KenPom: Ohio State 70, VCU 69

For much of this season, the Hoosiers have had a size disadvantage. For once, though, they will have an advantage in size on Friday. Their opponent, however, makes up for that size in physicality and plenty of wins: Wichita State. Just a season after their 35-1 mark, the Shockers are once again among the nation’s elite at 28-4 — and yet they come into the NCAA tournament with a No. 7 seed, facing a Hoosiers team that has lost nine of its past 14 games. And the winner could have a shot at Kansas, another blue-blood program Indiana could top or an in-state rival the Shockers are desperate to beat.

This game presents a challenge more to the Hoosiers than to the Shockers, though, as outside of size Wichita State holds several key advantages over Indiana. Its offense ranks No. 20 in the nation at 1.13 PPP; Indiana’s defense ranks No. 216 in the country at 1.05 PPP allowed. Its offensive rebound percentage ranks No. 55 in the country at 34.8 percent; Indiana allows opponents to rebound 31.2 percent of its misses (ranking No. 179 in the nation).

And on defense, the Shockers allow just 26.5 percent of opponents points to come from 3s. The Hoosiers, however, rely heavily on just that as 36.1 percent of their points come from 3s (the No. 22 highest rate in the country). And while the Hoosiers ranked tops in the Big Ten in 3-point shooting (40.7 percent) and the Shockers have struggled with 3-point shooting defense overall this season, in Missouri Valley Conference play the Shockers had the best 3-point defense at a 31.2 percent rate allowed. But while the numbers are against the Hoosiers, this is the NCAA tournament. And with a win-or-go-home mentality, as with any game in March Madness, anything can happen. KenPom: Wichita State 74, Indiana 68