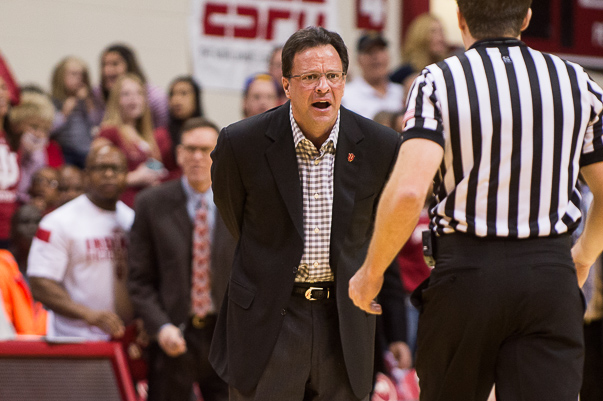 The Big Ten held its weekly coaches teleconference on Monday morning to review the final week of conference play and to look ahead to this week’s conference tournament in Chicago. Here are some notes and quotes from Tom Crean’s appearance:

On Yogi Ferrell’s play this season:

“Well I think he continues to get better and better. He’s his own worst critic at times and at the same time, he’s got an edge and a level of toughness that is outstanding. We need him to play with that. We need him to play with edge on defense as well as offense and be the stopper and be the team leader on the defensive end of the court that he is on the offensive end of the court because when we have that, we’re good. He does a lot of things. He improves all of the time. He improves every year and throughout the year and I wouldn’t trade him for anybody, he’s done a fantastic job.”

On the difficulty of building a program with staying power in college basketball when the elite players leave after one season:

“Well, it’s extremely difficult and we’re going through that now in the sense of what we lost in Noah Vonleh. It’s one thing when you lose them after two or three years like we did a couple of years ago with Cody Zeller and Victor Oladipo, but when you lose somebody that carries so much of the bulk on offensive and defense, especially with the scoring and the rebounding for big players, it’s difficult because it’s hard to recruit to replace it unless you’re doing it year after year. And there’s some in the country that do a great job of doing it year after year, but that’s a little bit harder to do for most everybody else. I think our guys have done a fantastic job here of improving, of developing and then when that opportunity comes then obviously they want to take it, but you’ve got to … especially on the front line, that’s where it’s such a challenge. But to me, it’s part of it and it’s going to be the way that it is unless the rule changes and you want people to be able to pursue their dreams because that’s a big, big part of this and you want to be able to develop them and watch them be able to go and have success, that’s a big part of this, but at the same time, you’ve got to be able to respond and some times it’s harder than others.”

On how big of an issue the one-and-done is for college basketball:

“I think there’s a lot of discussion on it in the sense of, ‘is this the best way? Should it go to a couple of years? Should it be out of high school?’ Whatever it is. I’ve been a part of some of those conversations, but not as much because it’s going to come down to the decision makers not thoughts and opinions. So to me, it is a big deal. Would I like to see it change? Sure. I’d like to see it change a little bit, but I’m never going to be in the way of a person making progress and being able to achieve their dreams because again, that’s what we’re supposed to do. We’re supposed to help them get to that point and the beauty of it here and we never want to lose it, is the level of ability that you can get done academically. Noah Vonleh left here after one year and was 48 percent of the way to graduation. And so you never want to have anybody that’s going to come in and put academics or being a great teammate or being responsible on or off the court on the back burner just because of their talent basketball wise. And so again, I’m not sure if that has anything to do with whether it’s one year, two year, whatever it is, two years certainly gets them solidified that much more and even if they left after high school because they were good enough to do it, that’s something that’s gotta be on the table as well. To me, it’s all about the individual person and will they come in and do everything that they need to do to make your team successful no matter how long they are there and I don’t know that you can legislate that with a timeline.”

On whether the familiarity with playing Northwestern just a few weeks ago helps with preparing to play them on Thursday:

“Absolutely because there were some really good things in that game but we also saw where we lost our edge in that game as well. We’ve got to do a great job, just as we said then, we’ve got to do a great job on Tre Demps because he took the game over in the second half and we didn’t respond to it as well and that’s got to be a big part of it. They’re playing with a lot of confidence. The Michigan win was a huge one certainly after us, the zone is good because it keeps their players on the floor, it keeps them out of foul trouble, especially when they can play Alex Olah a lot of minutes. We can attack the zone better. We attacked it pretty well at times and there were other times that we missed what was there. We’ve got to do a better job all the way around in that game but I do think because it is still fresh in our minds from the mistakes that we made and the successes that we had, that it should help us lead into the preparation.”

On how much of a difference Collin Hartman can make:

“I think it’s going to make a huge difference. And it didn’t make as much of a difference the other day because he really played a lot of minutes, he probably played more minutes … he didn’t play more minutes than he was allowed to play doctors wise, but he played more minutes than he was ready to play. We needed him on the court. He was our leading block out guy percentage wise and he didn’t play a great game and didn’t play with his normal confidence and movement and that’s to be expected. We’ve missed him. We’ve missed him a great deal. There’s only one or two players whose percentages haven’t been significantly different without him in the lineup while he was out. Hopefully this gives us a couple of more days to get us healthier and get him more in a rhythm, get him more acclimated again. And get him feeling good because he’s been a huge, huge part of what we’re doing especially in the zone situation because you’ve got to account for him in so many different places because he can be at the basket, he can be in the middle of the lane and he can certainly shoot 3s. No question, we get him healthy, that’s going to help us a great deal.”