Indiana loses critical game — without putting up a fight 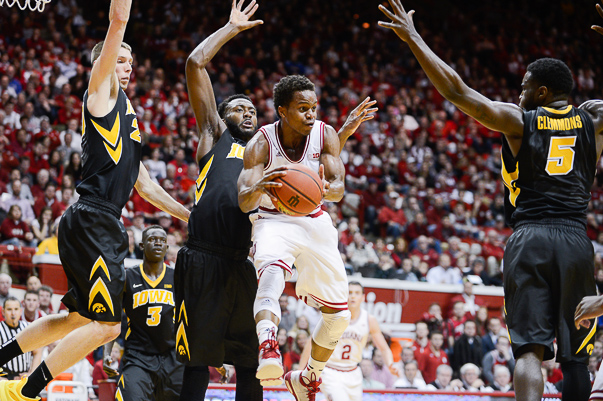 What was left of Indiana’s crowd booed. Most of it had left minutes earlier.

Indiana coach Tom Crean even hastily instructed his players: “Shake hands and get off the court.”

This was the humbling scene after the final buzzer sounded on Tuesday night, ending Indiana’s 77-63 loss to Iowa in Assembly Hall. It was the Hoosiers’ second straight loss at home — the first time that has happened since the 2010-2011 season.

Heading into this game, the Hoosiers had stressed how important it would be to win. They lost it without putting up a fight.

“A loss like this,” Yogi Ferrell said, “is pretty disappointing.”

The Hoosiers had six days to prepare for Tuesday’s game following last Wednesday’s seven-point loss at Northwestern. Ferrell on Sunday said they believed “we have the most energy we’ve had all season.”

“I have got a plan and a strategy,” Crean said on Sunday night. “But if you’re not willing to adjust it and be flexible, that’s not any good. We’ve looked at exactly what we’ve needed to do. We’ve pinpointed what we could improve upon.”

And in Assembly Hall, in their arena, those requirements did not seem out of the question.

All season long the Hoosiers have stressed a one-game-at-a-time mentality. But there was no denying before Tuesday’s game that the players knew how significant it would be. Ferrell said “these last two games for us are big.” It especially helped that they would be played in front of a home crowd.

But from the start of Tuesday’s game, it was clear the Hoosiers were in for a struggle.

In the first half, they struggled to move the ball through the paint. The offense stagnated — to the tune of nine turnovers, a 36-percent shooting percentage and just two baskets in the final 10:15 of the half. Yet, they trailed by just four points at the half. They held the Hawkeyes to zero points in transition and led the critical rebounding battle.

Heading into the final 20 minutes, the Hoosiers had one of their biggest tasks of the season ahead of them. Win and they had their 20th win of the season and a potential NCAA tournament bid locked up. Lose, and who knows what the future holds.

Within the first 5:05 of the second half, it was clear what direction the Hoosiers were heading in. That is where the positives ended.

Outside of a James Blackmon Jr. 3-pointer, they turned the ball over twice. They had another four misses, meanwhile allowing four Iowa baskets — three of those in the paint. Iowa led, 40-31. The tone was set for the remainder of the game.

Indiana’s offense continued to stagnate in the second half. It did not move well against the Hawkeyes’ zone. It had little penetration and plenty of standing around and passing along the perimeter.

The Hoosiers shot 41 percent from the field in the final 20 minutes, with another five turnovers. The Hawkeyes, meanwhile, capitalized on seven offensive rebounds to the tune of 12 second-chance points. They shot 17 free throws to Indiana’s five.

By the under-4 timeout, the Hoosiers trailed 65-53. Fans streamed out of Assembly Hall. The booing began in full force. Indiana already was defeated.

“Unfortunately, they got too many easy baskets and got into the game and we had trouble getting back from that,” Crean said.

In a second half that the Hoosiers needed to show up in, to produce their best basketball, they were dominated. And that might be sugar-coating it.

“Really we’re just going to have to watch the film and see what we did wrong and go to practice and get better from it,” freshman James Blackmon Jr. said. “I really have no reason right now.”

This is a loss that defies explanation — as Blackmon suggested. The Hoosiers needed a win. They should have won — they were playing inside Assembly Hall, a building in which they were 15-2 before Tuesday.

It’s troubling that Indiana lost on its home court on Tuesday night — its fourth loss in its past six games.

Even more foreboding, though, is that they lost it without putting up a fight.