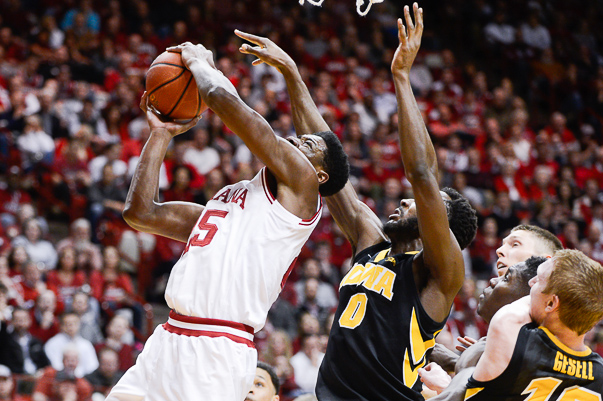 Just get through the first half of the Big Ten season alive, they said. It was supposed to be all downhill from there. The Hoosiers did more than that. They exceeded what was expected of them, winning games they started as underdogs. They won on the road. Some in the media were singing the praise of Tom Crean and his Hoosiers. There was coach of the year talk. The Hoosiers were dubbed as the most watchable team in the country.

But there hasn’t been much watchable about this team of late. After starting 5-1 in the Big Ten, Indiana’s just 4-7 since then. The Hoosiers are limping towards the finish line, and it’s all passing them by.

This Indiana team was always built to score and it simply hasn’t happened over the last 60 minutes of play. Indiana went ice cold against Northwestern in the second half, shooting 3-ball after 3-ball over its zone and not scoring a field goal for 10:06. Indiana didn’t hit a drought quite as big tonight, but it wasn’t markedly better. In a sloppy first half for both squads, the Hoosiers hit just two field goals over the final 10:15 of the first half. And that two could have been just one if Robert Johnson didn’t hit a long 2 at the buzzer.

Beyond the scoring drought, the Hoosiers also turned the ball over on 27.2 percent of their possessions in the first frame. They’d finish the half scoring just .85 points per possession. Iowa had some trouble with the ball as well (21.2 TO%) and Indiana actually held them under a point per possession (.97).

A 32-28 halftime deficit wasn’t insurmountable, but Indiana wasn’t giving off many positive vibes.

As the second half began, James Blackmon Jr. hit a 3-pointer to pull Indiana within one (32-31) and maybe it was going to turn around. But it simply didn’t happen. Even good looks in the paint and around the hoop Indiana couldn’t drop in. And any time the Hoosiers seemed like they may be gaining a little momentum, Iowa was able to answer on the other end time and again.

The Hoosiers were able to pull within five on a Nick Zeisloft 3-pointer at the 11:20 mark (48-43). But after Yogi Ferrell — who finished just 3-of-11 from the court — missed a line drive 3-pointer that clanged off the front of the rim, Anthony Clemmons hit a 3-ball for Iowa on the other end to put them back up eight. It was as close as Indiana would get the rest of the way out, as Iowa pushed the lead out comfortably and settled on a 14-point victory, the Assembly Hall crowd booing and leaving the arena before the end of the game in disgust.

On a night Zeisloft hit 5-of-7 from distance to help Indiana set a program record for 3-pointers in a season, the rest of Indiana went just 18-of-53 from the field on the evening. Troy Williams tried to be the hero and bring Indiana back into this one, but he was a bit over aggressive at times and didn’t find baskets as easy against Iowa’s length. He finished just 3-of-13. Indiana entered the contest as the seventh best offensive squad in the country from an efficiency standpoint but were only able to muster .94 points per possession at home in a game it really needed to solidify an NCAA tournament spot.

Iowa didn’t throw a zone at the Hoosiers all evening, but when it did, Indiana seemed a little off. Without the dribble weave and freedom of movement in man-to-man, there’s just a little less energy and movement. And when the shots aren’t falling, the heads sometimes sink — as they did against Northwestern.

It’s possible Indiana could lose out and still go dancing, but it’s not anything fans are interested in seeing be put to the test. A win against Michigan State on Saturday would at least keep some of the pressure off this coach and his team. But after the last two games, another loss would come as little surprise.