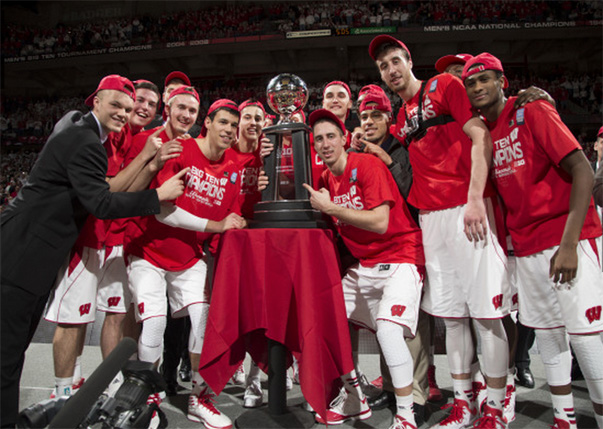 The Inside the Hall Big Ten Power Rankings are back for another week, as Wisconsin has clinched at least a share of the Big Ten title while five other teams remain in contention for top four Big Ten tournament seeding.

Here’s a look at where each team stands following the ninth week of play in 2015:

14. Rutgers (10-19, 2-14, PPP: .89, PPP Allowed: 1.07) (Last week: 14) … The 12-game losing streak continues, but the Scarlet Knights showed life in Thursday’s loss at Purdue. They got down by as many as 20 points midway through the second half, but to close the game Rutgers outscored Purdue, 38-25, even cutting the Boilermakers lead to just six points with 21 seconds remaining. The game also happened to have the Scarlet Knights’ most efficient offensive output in that losing streak at 1.11 PPP, their best mark since their Jan. 11 win over Wisconsin. (Next up: March 3 vs. Maryland; March 7 at Michigan)

13. Penn State (15-14, 3-13, PPP: .95, PPP Allowed: 1.01) (Last week: 13) … They had just one game this past week, and the Nittany Lions nearly managed to earn their first win in three weeks. But an up-and-down game against Iowa ended in yet another loss for Pat Chambers’ squad, as it sealed a bottom-four finish in the league for the fourth straight year in Chambers’ tenure. The Nittany Lions, however, did give Iowa a run for its money — taking a 12-point lead early and coming back from a seven-point halftime deficit to force overtime. The stinging, game-deciding play, however? A D.J. Newbill turnover with 30 seconds left in his second-to-last ever game inside the Bryce Jordan Center that turned into two Iowa free throws and an insurmountable deficit. (Next up: March 4 vs. Ohio State; March 8 at Minnesota)

12. Nebraska (13-15, 5-11, PPP: .93, PPP Allowed: 1.04) (Last week: 12) … Loss after loss, the Cornhuskers continue to struggle with no end in sight. Just a game after Tim Miles banned his players from their locker room and lounge for showing a lack of effort in their 74-46 loss to Iowa, the Cornhuskers responded with an 81-57 loss at Ohio State. After the 24-point loss, Miles said attitude and effort weren’t even a problem against the Buckeyes. The Cornhuskers were simply dominated on the road, were down 18 by halftime and never had a response on the road in Columbus. (Next up: March 4 at Illinois, March 8 vs. Maryland)

11. Northwestern (14-15, 5-11, PPP: 1.02, PPP Allowed: 1.11) (Last week: 11) … Well, the Wildcats finally did it — Wednesday’s win over Indiana sealed their first four-game Big Ten winning streak since the 1966-67 season. It’s a feat that Chris Collins achieved in just his second season that the Wildcats hadn’t been able to accomplish in 48 seasons, but they quickly came down to earth in an 86-60 loss at Illinois on Saturday, in which they trailed by 22 points at halftime. Regardless, the streak was one for the Wildcats to remember — with the future looking bright heading into future seasons under Collins. (Next up: March 3 vs. Michigan; March 7 at Iowa)

10. Michigan (14-14, 7-9, PPP: 1.00, PPP Allowed: 1.06) (Last week: 9) … After their big win last Sunday over Ohio State, which stopped their five-game losing streak, the Wolverines struggled on the road on Saturday at Maryland, which ended in a 66-56 loss. They stayed close for much of the first half before getting down nine at halftime and even got within three points halfway through the second half, but when the Terrapins made their run late, the Wolverines never had an answer — their sixth loss in their past seven games. (Next up: March 3 at Northwestern; March 7 vs. Rutgers)

9. Minnesota (17-12, 6-10, PPP: 1.03, PPP Allowed: 1.05) (Last week: 10) … They had lost three straight games and were down by six with 34 seconds remaining at Michigan State on Thursday. But when the Spartans faltered in that span, with missed free throws and fouls (including two on 3-point attempts), the Golden Gophers pounced, coming back, forcing overtime and continuing their offensive outburst in a 96-90 win in East Lansing. It marked a signature win for the Golden Gophers — just their second on the road in Big Ten play this season — and their first in East Lansing since 1997. (Next up: March 5 vs. Wisconsin; March 8 vs. Penn State)

8. Illinois (18-11, 8-8, PPP: 1.01, PPP Allowed: 1.02) (Last week: 8) … The Fighting Illini stopped their three-game losing streak on Saturday with a dominating 26-point win over Northwestern. But it likely won’t do much to put them off the bubble. As of right now, CBS Sports predicts the Illini to make the 68-team field. ESPN does not. But with a game at Purdue looming this weekend and the Big Ten tournament following that, the Illini have opportunities remaining to convince the selection committee. It’s just a matter of seizing those chances. (Next up: March 4 vs. Nebraska; March 7 at Purdue)

7. Indiana (19-10, 9-7, PPP: 1.13, PPP Allowed: 1.11) (Last week: 6) … It’s not often that the Hoosiers’ scoring stops — but that happened in Wednesday’s loss at Northwestern. In fact, from the 13:23 to 3:17 marks of the second half against the Wildcats, the Hoosiers went scoreless. And to any team, a 10-minute scoring stretch is nearly a death sentence — but the Hoosiers actually managed to score 17 points in the final 3:17 until succumbing to the Wildcats in a seven-point loss. And as the season winds down, the Hoosiers find themselves now 4-6 in their past 10 games. (Next up: March 3 vs. Iowa; March 7 vs. Michigan State)

6. Michigan State (19-10, 10-6, PPP: 1.09, PPP Allowed: 1.00) (Last week: 4) … When the week began, the Spartans found themselves in great position to secure a top-four Big Ten finish and a double bye in the Big Ten tournament. But after two straight losses — including a blown opportunity against the Golden Gophers and a loss at Wisconsin in which they trailed by 19 points with less than seven minutes to go — the Spartans find themselves on the outside of the top four looking in, with a battle against Purdue and a road game at Indiana on tap in the final week of regular season action. (Next up: March 4 vs. Purdue; March 7 at Indiana)

5. Iowa (19-10, 10-6, PPP: 1.11, PPP Allowed: 1.05) (Last week: 7) … They faced a scare on Saturday at Penn State, but the Hawkeyes did not look back in overtime en route to their fourth straight win heading into the final week of the regular season. Just two weeks ago, the Hawkeyes were coming off losses to Minnesota and Northwestern and were nearing the bubble. But as they continue to take care of business, the Hawkeyes find their NCAA tournament chances increasing game-by-game — something they struggled to achieve toward the end of last season. (Next up: March 3 at Indiana; March 7 vs. Northwestern)

4. Ohio State (21-8, 10-6, PPP: 1.10, PPP Allowed: 1.00) (Last week: 5) … The Buckeyes found themselves in an unfamiliar position on Sunday night — trailing by double digits at home against Purdue. But give Thad Matta’s team credit — they stormed back and found a way to win against the Boilermakers in a 65-61 game — something they were not able to do earlier this season in West Lafayette. The end to this season has not been particularly smooth for the Buckeyes — they had lost two straight heading into this past week — but with two straight wins they appear to be ending the regular season on the right note. (Next up: March 4 at Penn State; March 8 vs. Wisconsin)

3. Purdue (19-10, 11-5, PPP: 1.04, PPP Allowed: .99) (Last week: 2) … The Boilermakers had a chance on Sunday night to further their résumé as they remain on the NCAA tournament bubble, leading Ohio State by more than 10 points in Columbus. But they were unable to hold on in a four-point loss, a missed opportunity that could have ensured them their 12th win in Big Ten play. Regardless, the Boilermakers have come a long way since their last-place finish last season and even their losses to North Florida and Gardner-Webb just a few months ago. And that is something this group deserves a ton of credit for. (Next up: March 4 at Michigan State; March 7 vs. Illinois)

2. Maryland (24-5, 12-4, PPP: 1.02, PPP Allowed: 1.01) (Last week: 3) … Not much was different this past week for the Terrapins — they won each of their two games by 10 points or less, like they have in the majority of their wins this season. The more significant factor was who those two wins came against — first against No. 5 Wisconsin in a 59-53 win, and then Michigan just four days later. Yes, the Terrapins have had an immense home court advantage this season — they were 18-1 at home, their only loss coming against No. 2 Virginia — but to beat a top five team and to respond with a convincing 10-point win in the following game shows just how good they can be when focused. They are about to be rewarded with their first NCAA tournament bid since the 2009-2010 season. (Next up: March 3 at Rutgers; March 8 at Nebraska)

1. Wisconsin (26-3, 14-2, PPP: 1.21, PPP Allowed: 1.01) (Last week: 1) … Their 10-game winning streak came to an end on Tuesday night more than 700 miles away from Madison in a six-point loss at Maryland. But as the dominant team in the Big Ten for much of the 2014-2015 season, the Badgers responded masterfully in a 68-61 win over Michigan State which really wasn’t that close (Wisconsin led, 62-43, with 6:58 to go). The win on senior night for Frank Kaminsky, Traevon Jackson and Josh Gasser clinched them at least a share of the Big Ten title. And all the Badgers need is one win or one Maryland loss this upcoming week to clinch the title outright — which would be their first since the 2007-2008 season. (Next up: March 5 at Minnesota; March 8 at Ohio State)