Hartman’s status “uncertain” ahead of trip to Northwestern 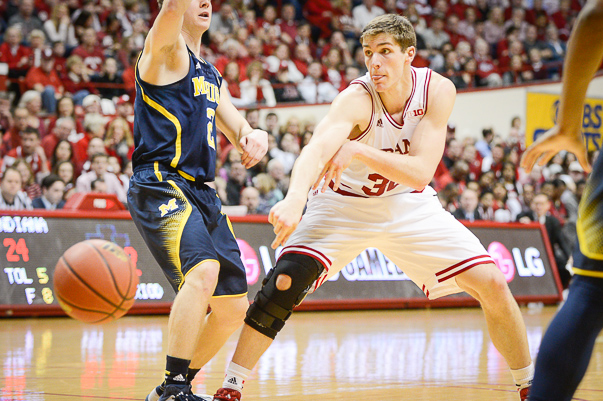 Indiana sophomore forward Collin Hartman, who left Sunday’s 84-54 win at Rutgers with an apparent left knee injury, is day-to-day according to Tom Crean. (Update: On Tuesday, Tom Crean said Hartman’s injury is a bone bruise to his lower leg.)

On his radio show Monday night, Crean said he was unsure whether Indiana would have Hartman, who spent Monday undergoing tests, for Wednesday’s trip to Northwestern. The suddenly hot Wildcats have won three straight games.

“It’s too early to tell. The doctors were in today,” Crean told Don Fischer. “His status is a little uncertain right now. Right now it’s going to be day-to-day for a bit.”

Hartman, who has come off the bench for Indiana’s last two games, played 11 minutes and went scoreless in IU’s win over the Scarlet Knights.

At the 15:52 mark in the second half, Hartman collided with Junior Etou and was whistled for a foul and had to be helped off the floor by his teammates. He did not return to the game.

The Indianapolis Cathedral product is averaging 5.2 points and 3.3 rebounds in 20.3 minutes per game. Hartman started 10 straight games in conference play after the Hoosiers lost junior Hanner Mosquera-Perea to a knee injury.