Indiana struggles with familiar issues in 67-63 defeat to Purdue 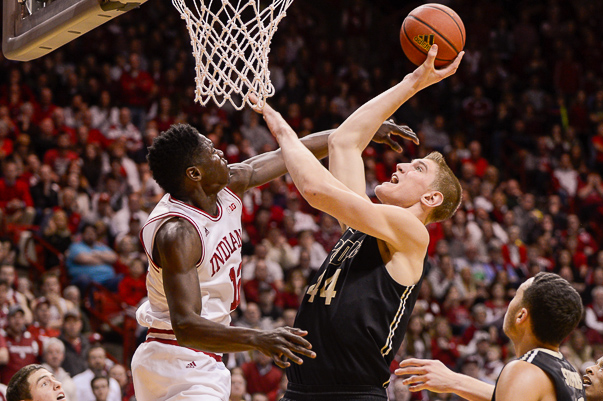 Indiana came into Thursday night’s game against Purdue with an unconventional game plan: to force and defend the 3.

The Boilermakers’ bread and butter came in the paint, but they were the Big Ten’s second-worst 3-point shooting team. And against the Hoosiers on Thursday, the Boilermakers went 2-of-18 from behind the arc. Not that it really mattered, anyway.

Purdue had no issues dominating the paint in its rematch against Indiana, as the Hoosiers were defeated on their home court for just the second time this season in a 67-63 loss to the Boilermakers.

“Really, we felt like we defended the three really well, which was our game plan,” freshman James Blackmon Jr. said. “But when the shot went up, guys weren’t blocking out, they got a couple of rebounds and that’s what got them going from the beginning.”

Indiana started the game at its desired pace.

But that success was short-lived. As the Boilermakers settled in at Assembly Hall, they began to see the same successes they had in their earlier 83-67 win over the Hoosiers in January.

The patient comeback started with a Jon Octeus layup — a sign of things to come as the Boilermakers guards found penetration in the paint. They also fed 7-footers Isaac Haas and A.J. Hammons the ball with little contention. The Hoosiers’ 1-3-1 zone was ineffective.

Indiana’s 20-12 lead had quickly evaporated into a tie at 27, only for it to be broken just before halftime with a Yogi Ferrell runner just before the buzzer. But more importantly, the Boilermakers had a 15-12 edge on the boards. They also had a 7-0 second-chance points edge.

“I don’t think it’s any big secret,” Indiana coach Tom Crean said. “We didn’t stand our ground. When they’re coming down the lane, you’ve got to have better — I mean you’re in the zone for a reason.”

Their help defense gave Indiana few looks on the perimeter, even off inside penetration. And when the Hoosiers tried to score inside, it came with varied success against the much bigger Boilermakers.

In conference play, the Hoosiers lead the Big Ten in percentage of their points coming on 3-pointers. But for a span of more than eight minutes in the second half — from the 16:58 to 8:10 marks — the Hoosiers couldn’t even get off a 3-point attempt.

“The shots we made the other night and the shots we’ve been making, they didn’t go,” Crean said. “We didn’t get as many attempts, and we probably spent a little too much time trying to drive and create things rather than just make it simple, and really drive it for that next kick.”

Most importantly in that second half, off those misses the Hoosiers struggled. Indiana was out-rebounded in the final 20 minutes by a 23-9 margin.

“We’ve got to get better rebounding out of our front line,” Crean said. “Again, when you’re dealing with the front line the way you are with them, you’ve got to do a better job of limiting it to one shot. That’s why when we’ve had success, we’ve out rebounded people and held them to one shot for the most part and then we get some offensive scores.”

In the final minute, with the Hoosiers trailing by one, it was recurring issues throughout the game that eventually haunted them.

Off a timeout with 36 seconds remaining, Purdue’s Rapheal Davis drove to the basket and got a layup with ease. Those were Purdue’s final two points in the paint — they had a total of 40 on the evening. 20 of those came from Hammons and Haas. 20 came from its guards.

When two possessions later, Ferrell had the ball off a missed free throw, he missed a contested three and Purdue quickly grabbed the ensuing rebound with less than five seconds left and a 65-63 lead. Hammons, who finished with 20 points off 8-of-9 shooting and 4-of-5 free throws, drained his two attempts at the line to put the game out of reach.

And by the time the final buzzer sounded, the stats spoke for themselves.

For the second time this season, the Hoosiers couldn’t stop the Boilermakers. And on Thursday, that led to a defeat at home.

“We gave up too many points in the post, and it wasn’t just the post-ups, it was the rebounding, and we didn’t out-rebound the way that we needed to,” Crean said. “Our front line did not — it’s one thing to give up the points, but we’ve got to get some defensive boards. So the defensive rebounding, it hurt us. It definitely hurt us.”