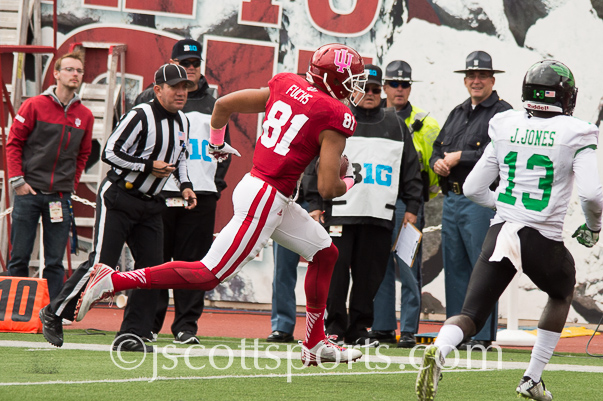 COLLEGE PARK, Md. – Indiana’s frontline depth got a boost on Wednesday afternoon when the program announced the addition of Jordan Fuchs, a 6-foot-6, 230 pound forward, to the roster.

Fuchs, who is on football scholarship at Indiana as a tight end, will be available tonight for Indiana’s game with Maryland at the XFinity Center.

“Jordan is someone we’ve been aware of for some time now and had he not gotten injured in the Purdue game and had to recover from that we would have brought over to evaluate earlier,” Tom Crean said in a release. “We worked with him since last week and with Coach (Kevin) Wilson’s blessing we are adding Jordan at this time. He has considerable basketball experience and brings size, athleticism, toughness and a tremendous competitive attitude.”

He appeared in all 12 games for IU football this season and caught three passes for 31 yards and a touchdown. Fuchs was a dual sport athlete in high school and had scholarship offers to play basketball from Iowa State, SMU and Florida, according to an IU release.

As a senior at Christ the King in New York, he averaged 11.7 points and 6.4 rebounds per game and shot 52.6 percent from the field.