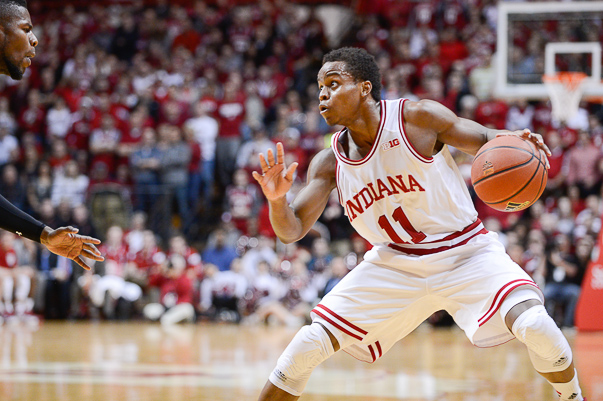 After missing the postseason altogether last season, Indiana is in solid position to return to the NCAA tournament. IU split a pair of games last week and currently sits at 17-7 overall and 7-4 in Big Ten play.

We’re back this week with another edition of “March Watch,” which will be a weekly feature up until Selection Sunday on March 15. We’ll take a look at IU’s current nitty gritty profile, bracket projections, Big Ten bubble teams and more.

Indiana continues to boast a strong tournament profile with four wins over teams currently viewed as solid bets to make the tournament in Butler, SMU, Ohio State and Maryland. IU also has a win over Illinois, which is starting to make a case for tournament consideration. With seven conference games to go, including four at Assembly Hall, there are plenty of opportunities for Indiana to further strengthen its resume.

Not much has changed in the last week as Indiana is solidly in the field in every projection we’re tracking. The seeding model on Crashing the Dance currently has the Hoosiers with the third best overall profile among Big Ten teams behind Wisconsin and Maryland.

KenPom.com continues to project Indiana to finish 21-10 overall with an 11-7 mark in the conference. The Only Colors, which has been projecting the Big Ten race all conference season, gives Indiana a 93.63 percent chance to finish with 10 or more conference wins and a 76.81 percent chance to win 11 or more Big Ten games. RPIForecast.com continues to list he three most likely final regular season records for IU as: 21-10, 20-11 and 22-9, as shown below: 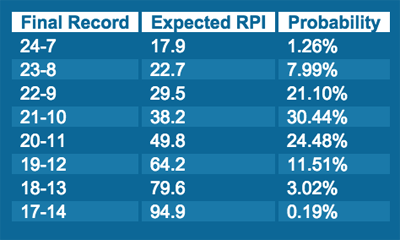 As for the Big Ten at-large, the latest ESPN bracketology has the league as a seven-bid league with an eighth team, Purdue, in the mix. Right now, you can probably only put Wisconsin and Maryland as the teams that are “locks” to make it. Here’s a brief look at other profiles across the league:

· Wisconsin (21-2, RPI 6): The Badgers, who are still without Traevon Jackson, are running away with the Big Ten regular season crown. The only question for this team is whether it can claim a No. 1 seed come Selection Sunday.

· Maryland (19-5, RPI 17): The Terps have struggled on the road in Big Ten play (lopsided losses at IU, Ohio State and Iowa), but they continue to take care of business at home and non-conference wins over Iowa State and Oklahoma State will boost their overall resume.

· Ohio State (18-6, RPI 35): The Buckeyes have won four of five and would probably be in line for a much better seed if not for such an unproductive non-conference schedule. Ohio State’s best non-conference win was Marquette, a victory that will do nothing to impress the selection committee.

· Iowa (15-8, RPI 38): After dropping three straight, the Hawkeyes have responded with a pair of wins (at Michigan, Maryland at home) and with a favorable schedule down the stretch, Iowa is a team on the rise in most projections. A non-conference win at North Carolina helps tremendously, too.

· Michigan State (15-8, RPI 52): Things are starting to get interesting in East Lansing. The Spartans just lost at home to Illinois and right now Tom Izzo’s team is on the bubble. Michigan State is just 2-6 against the RPI Top 50 and with trips to Wisconsin, Michigan, Illinois and IU still pending plus home games against Ohio State and Purdue, there’s little margin for error.

· Illinois (16-8, RPI 48): The Illini’s win at Michigan State was pivotal. Trips to Wisconsin, Iowa and Purdue are still looming and coming away with a win in any of those venues will be incredibly difficult. Illinois has four home games remaining in its last seven games and if it can simply hold serve at home, 20 wins and a rising RPI could be enough to punch a ticket.

· Purdue (15-9, RPI 71): The Boilermakers are currently tied for second in the Big Ten standings, but non-conference losses to North Florida and Garder-Webb are still weighing down the overall profile. Of the eight Big Ten teams in the mix for a NCAA bid, Purdue has the worst profile, but opportunities for wins at Indiana, Ohio State and Michigan State still loom.