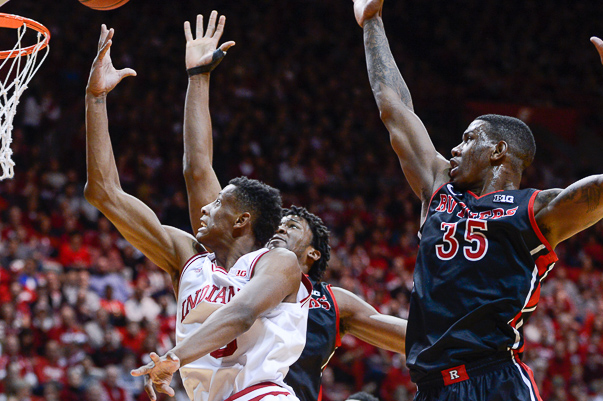 On Saturday afternoon, Rutgers chose to slow the game down against Indiana.

The Scarlet Knights took their time with their possessions. They got back in transition defense. They made the Hoosiers play to their game.

But after closely contested 40 minutes, the Hoosiers managed to pull out a 72-64 win. And they find themselves now 16-6 and 6-3 in the Big Ten thus far.

“We had to grind it out,” Indiana coach Tom Crean said. “I hate the word grind, but we had to be really tough today to figure out a way to win it.”

Saturday’s game was the slowest the Hoosiers had played in this season in terms of possessions — but Rutgers coach Eddie Jordan said it wasn’t the plan to slow the Hoosiers down — although it played right into the Scarlet Knights’ hands.

In the first half initially, the Hoosiers had trouble speeding the game up. The Scarlet Knights took their time on offense and got back in transition. They didn’t give the Hoosiers many chances to do what they wanted.

“We saw that in the first half, and we actually wanted to speed them up,” freshman James Blackmon Jr. said. “So we went to a little pressure 1-3-1 type of defense, and that speeded them then.”

In fact, in one stretch of the first half the Hoosiers forced three steals in a row. They converted at the rim off all three turnovers. It sparked a 10-2 run that Indiana coach Tom Crean called “key for us in the game.”

And in the second half, the Scarlet Knights once again slowed down the game — even taking a 52-45 lead at one point.

But the Hoosiers once again changed defenses — this time back into a 2-3 zone — and forced four straight Scarlet Knights misses, in turn tying the game and setting the tone for the rest of the afternoon.

Overall, the Hoosiers finished with forcing 13 turnovers on six steals, converting on 15 points in transition and another 18 on the fast break.

It wasn’t the typical Indiana win. For much of the game, the Hoosiers were forced to play in the half-court — to cut, to make the next pass and find open shooters.

But the Hoosiers found a way to win.

“It’s the secret you want everybody to figure out,” Crean said. “When you’re focused on the things that you can control, the rest of it comes.”

At the under-8 media timeout with 7:34 remaining and the Hoosiers trailing, 56-54, Indiana’s players spoke to each other during the huddle.

“Every one of us just said, ‘come on, give it all for these last seven minutes,'” Blackmon said. “And we just toughed it out.”

As they continued to be slowed down by the Scarlet Knights, who continued to take their time, the Hoosiers clamped down on defense out of the timeout and began to pull away.

Out of that timeout, the Hoosiers forced four Scarlet Knights misses and two turnovers from the field.

And in that same span, junior Nick Zeisloft, who hadn’t played in more than five minutes and had taken just one shot from the field the entire game, was substituted in and drained two 3-pointers.

The first gave Indiana the lead it would not lose again. The second, with 4:19 remaining, put the Hoosiers up seven at 64-57, an insurmountable margin for the Scarlet Knights.

“Coach is always talking about playing on demand,” Zeisloft said. “You’ve got to be ready to take that shot at any time.”

And with the game coming down to the wire, the Hoosiers once again had to find a way to seal the game.

And in the closing minutes, the Hoosiers finished 8-for-8 from the line — with Collin Hartman, Yogi Ferrell, Robert Johnson and Nick Zeisloft each going perfect at the line — while allowing just one basket in the Scarlet Knights’ final four possessions.

Williams makes impact off the bench

Crean said there wasn’t a lesson to be learned.

But when he chose to switch sophomore Troy Williams out of the starting lineup for Saturday’s game, Williams said there was a lesson learned.

Because by the end of the Hoosiers’ win, the 6-foot-7 Williams had recorded a double double — with 14 points and 12 rebounds, along with 11 deflections and two steals and a block — and the praise of Crean, that it was the Williams performance “that we need to have.”

“When I come to play like that, we have a better chance of winning,” Williams said. “Or impact when I come in and play with energy.”

During Indiana’s shoot-around before the game, BTN analyst Stephen Bardo approached Crean about Williams — as he saw him communicating on the court holding other players accountable for their actions and their positioning. Bardo hadn’t seen Williams do that before.

It’s exactly why Crean said he holds Williams to a high standard — “because he is a very smart person and player.”

On Wednesday at Purdue, Williams went just 4-of-12 from the field and turned the ball over twice. Crean felt Williams could do better — get back to what he does best.

“It’s the activity, it’s the energy, it’s the leadership,” Crean said. “It’s the sharing his knowledge.”

Williams provided just that off the bench on Saturday — eventually playing 34 minutes and sparking the Hoosiers in a game that was played slow.

After the game, Jordan was asked about Williams’ performance. “He almost doesn’t have a conscience,” the Scarlet Knights coach said. And that’s a compliment.

He noticed Williams always “stays in attack mode.” And he said with Williams’ size and his confidence, good things will happen.

That’s exactly what the Hoosiers have wanted all along.

“That’s the Troy Williams that we need to have,” Crean said. “The points to me are a byproduct of his efficiency, his activity, his desire to get to the basket, his desire to deflect and defend, his desire to rebound, the energy that he played with, and usually when he plays like that, he gets the points.”