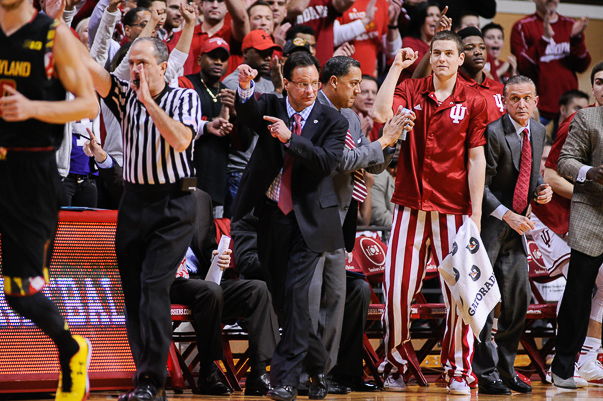 The Big Ten held its weekly coaches teleconference on Monday morning to review the fourth week of conference play.  Here are some notes and quotes from Tom Crean’s appearance:

· Opening statement: “Well we’ve got a short time here after playing yesterday to get ready for Purdue who is playing very, very well. So our focus is on that and at the same time, we’ve got to continue to learn from our week. We did some really good things in our Maryland win and we turned back around against Ohio State and did some good things, but we didn’t do enough of them. And Ohio State played very, very well and we’ve got to continue to understand how to get people out of their comfort zone, how to take away strengths of the other team and at the same time, continue to play to our strengths. Part of the challenge is making sure that we’re teaching these guys constantly what enables them to win, why they’re successful and keep moving on and moving forward with all of those type of things and that’s what we’re looking forward to doing today and as we get ready for Purdue.”

· On the status of Robert Johnson: “I didn’t realize this until we saw it on the film, which is really disappointing, when he fell, there was actually, it looked like, a red folder or papers that were laying close enough to the court that he slipped on, that were on the baseline by the cheerleaders. It’s one of those inadvertent things you hope never happens, but it did and they were just laying there as he finished his layup. So we didn’t realize that at the time in the game, at least I didn’t realize it until we saw it on the film, but I think the best news for Robert is that he went back into the game and now we have to continue to monitor it in a very close way and hopefully it doesn’t linger. But he was treating it last night and moving forward with that. It’s really going to be … we’ll just go and see what happens at the end of the day and see how he feels and as we get closer tomorrow and I don’t think it’s anything that is going to be long lasting, but there’s nothing that says it’s going to be OK for this game either, so it’s too early to tell I think.”

Here's Robert Johnson taking a spill after sliding on a piece of paper/placard on baseline yesterday. #iubb pic.twitter.com/4bq2U4z6IN

· On the nature of the injury to Johnson: “He just got an injury there. I’m not exactly sure what we would clarify it as. We’re just treating it.”

· On the challenge of guarding Purdue’s two 7-footers: “It’s obviously a major one because one is hard enough but when you’re dealing with two and they play through them and they can score, they just keep getting lower at the rim, that’s an issue. It’s not just a situation where we just can guard them, realistically, with one person throughout the entire game. So we’re working through that right now and we’ve already been talking about that. But we’re going to have to make sure that we don’t get away from what we want to do and at the same time, we’re going to have to be very, very good with pressuring the ball. They’ve got numerous guys that can hurt you from the perimeter, so they’re a well balanced team. There’s no doubt about that. They play extremely hard, they’re extremely competitive and the bottom line is, they play with a lot of movement so if you get too caught up in worrying about one or two things, they’ve got three or four other things that they can go to and take advantage of.”

· On Stanford Robinson’s play on Sunday and how much he’ll be challenged going forward if Johnson is limited: “I’m not sure it’s about that as much as it’s about … Stan was solid in some areas, but what Stan has gotta do is quit turning the ball over. He’s got to quit turning the ball over and he’s got to be a more efficient defender. We just can’t have the turnovers at the rim or driving through the lane. We’ve got to keep simplifying the game and when we try to do too much is when the issues come. He’s capable of more, he’s provided more and certainly in a game like this with Purdue who is really, really strong on the perimeter as well, it’s going to be important that he plays better. But we’re just going to focus on what the team needs to do today and not really get down to any one or two individual type of things where they’ve got to do this or they’ve got to do that to prepare for the game. We’ve got to make sure that we get our team square all the way around for how good Purdue is.”

· On whether other team’s big men having trouble matching up is working to IU’s advantage: “I wouldn’t say that. I’d say we’re playing the way we need to play and other teams are playing the way that they need to play. And that’s the way it is for us. Collin (Hartman) is a very talented player that’s skilled, can do things at the basket and can certainly do things away from it, so I don’t know if it’s an advantage, it’s just the way that we play. And it’s working for us. But at the same time, it wouldn’t work if you didn’t have a guy like Collin that is willing to get in the fight defensively and use his body and bang and battle with people. That’s easier said than done when it comes to what Purdue is doing with how big and physical they are. It’s just who we are right now and who we’re going to continue to be and then we’ve got to figure out things defensively as we go.”