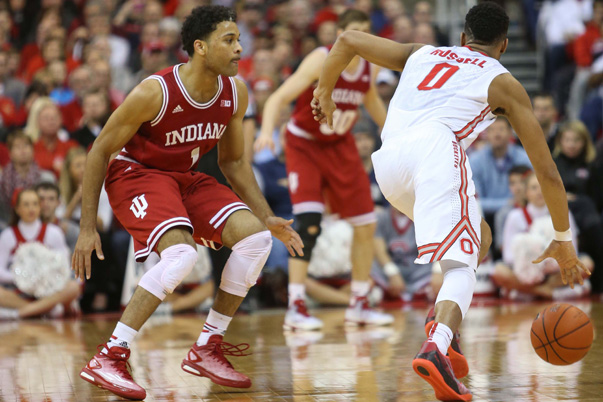 Indiana came into Sunday’s game at Ohio State with a plan of attack.

It wanted to give the Buckeyes multiple battles to fight on the offensive end of the court. On defense, it wanted to take away the effectiveness of guards D’Angelo Russell and Shannon Scott. Neither plan worked.

On an afternoon in which they turned the ball over at their second-highest rate this season and failed to stop both Russell and Scott, the Hoosiers found themselves with their second Big Ten loss this season in an 82-70 defeat at the hands of the Buckeyes.

“We knew what was coming,” Indiana coach Tom Crean said. “We just didn’t do a very good job of executing.”

As had been the case through their prior 19 games this season, the Hoosiers’ offense sparked the team early on Sunday afternoon. With an 8-for-8 start from the field, the Hoosiers had an 18-12 lead in the first half against the Buckeyes. Converting baskets wasn’t an issue for Indiana on Sunday. Finding offensive consistency was.

After the Buckeyes allowed the Hoosiers’ perfect start from the field, they began doing what they have been doing best this season — forcing turnovers. As the nation’s No. 12 team in opponent’s turnover percentage, the Buckeyes used their length into forcing empty Indiana possessions.

There were careless plays. Forced passes. Not enough penetration. And by the time the first half ended, the Hoosiers found themselves with 11 turnovers.

“Ohio State is very good with their hands. They’ve got quick hands, they get off the ball and help very well,” said sophomore Collin Hartman, who finished with three turnovers. “Today we didn’t cut hard enough and make hard passes.”

Those turnovers turned into easy Ohio State points, as well.

In the first half alone, the Buckeyes had 17 points off Hoosiers turnovers. 12 of those points came in the paint.

And as they got easy baskets in the paint in transition, the Buckeyes were able to spread their success even outside of Hoosiers turnovers.

Russell and Scott were able to spread the floor. The duo combined for 13 assists. The Buckeyes found open looks — inside and outside. They rarely missed.

And on an afternoon in which the Hoosiers struggled to stop offense, their own wasn’t enough to pull out the win on the road.

“We never took them out of what they wanted to do,” Crean said. “They never got uncomfortable, and therefore everybody else on the team was a beneficiary of it.”

Midway through the first half on Sunday, freshman Robert Johnson was substituted off the court and limped to the Hoosiers’ locker room.

He returned to action in the second half while wearing a soft brace on his left knee but finished with just two points and one rebound in just 17 minutes of play.

“He got banged up,” Crean said. “He was not the same. He was good enough to go back into the game, but I mean he certainly wasn’t at full strength.”