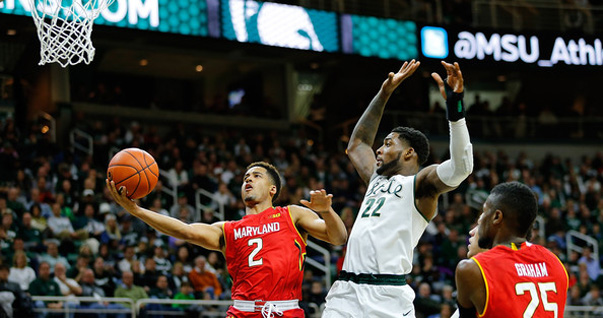 The Inside the Hall Big Ten Power Rankings are back for another week as no team remains undefeated in league play following Rutgers’ upset over No. 4 Wisconsin on Sunday evening. Here’s a look at where each team stands following the second week of play in 2015:

14. Penn State (12-4, 0-3, PPP: .96, PPP Allowed: 1.12) (Last week: 11) … After a non-conference season that had many optimistic about the Nittany Lions, it’s clear that a breakthrough season is very much in doubt. The Nittany Lions have started Big Ten season with three straight losses — with their past two at Rutgers and at home against Michigan — and their defense through the first two weeks of conference action has been the worst in the league. Their offense has not been much better, either, though they do play a vulnerable Indiana defense on Tuesday. (Next up: Jan. 13 at Indiana; Jan. 17 vs. Purdue)

13. Northwestern (10-6, 1-2, PPP: .95, PPP Allowed: 1.08) (Last week: 13) … The Wildcats gave Michigan State a run for its money on Sunday, nearly topping the Spartans before the home team pulled away in overtime in East Lansing. And Chris Collins’ squad pulled off upset after upset last season, but through more than half of the 2014-2015 campaign, the Wildcats have shown none of that magic thus far — its best win coming against Rutgers. That isn’t saying much, as the Scarlet Knights rank just No. 150 in the KenPom.com rankings. (Next up: Jan. 14 vs. Illinois; Jan. 17 at Michigan)

12. Minnesota (11-6, 0-4, PPP: .96, PPP Allowed: 1.05) (Last week: 7) … The Golden Gophers were expected to be near the top of the Big Ten as one of the two most experienced squads in the conference behind Wisconsin. But through four games Richard Pitino’s squad is in dead last in the league following close losses to Purdue, Ohio State and Michigan (and a not-so-close one at Maryland). Three of their first four Big Ten games have been on the road, but regardless as one of the older teams in the league the Golden Gophers have missed opportunities early on in 2015. (Next up: Jan. 13 vs. Iowa; Jan. 17 vs. Rutgers)

11. Rutgers (10-7, 2-2, PPP: .89, PPP Allowed: .94) (Last week: 14) … On Sunday night, the Scarlet Knights pulled off one of the biggest upsets of the season, knocking off No. 4 Wisconsin in New Brunswick after a 16-point loss at Nebraska just three days earlier. Yes, the Badgers were without Frank Kaminsky (concussion symptoms), and Traevon Jackson left the game due to a foot injury, but a win of that caliber is still impressive for the Scarlet Knights. The Badgers were the highest-ranked opponent Rutgers has ever defeated. (Next up: Jan. 14 at Maryland; Jan. 17 at Minnesota)

10. Illinois (11-6, 1-3, PPP: .88, PPP Allowed: .99) (Last week: 8) … Despite a slow start to the conference season, the Fighting Illini took advantage of their home court on Wednesday and soundly defeated Maryland in Champaign, forcing the Terrapins offense into just 0.89 points per possession. But away from the State Farm Center, in which they are 7-0, the Illini have yet to show the ability to win — they are 0-4 in true road games thus far this season. (Next up: Jan. 14 at Northwestern; Jan. 18 vs. Indiana)

9. Nebraska (10-6, 2-2, PPP: .98, PPP Allowed: .93) (Last week: 12) … They returned four of their five starters from last season, but the Cornhuskers have yet to find much of the same success they had after last year’s NCAA tournament appearance. And after a loss to Iowa, many were wondering whether they missed the spacing Ray Gallegos provided. But after a win over Rutgers on Thursday and another win over Illinois on Sunday, the Cornhuskers have at least shown they can return to their winning ways. That said, a tough schedule lies ahead in the coming weeks. (Next up: Jan. 15 at Wisconsin)

8. Purdue (10-7, 2-2, PPP: .99, PPP Allowed: .99) (Last week: 6) … After struggling in the non-conference season, the Boilermakers have created an identity off their strengths, using their size to dominate the paint and the game. The result produced wins against Minnesota and Michigan, but against two of the top teams in the league, Wisconsin and Maryland, the Boilermakers failed to stop the Badgers in the paint and strayed from their identity against the Terrapins (shooting 20 3-pointers). Two losses later, and it’s clear the Boilermakers still have work to do to battle for a spot in the top half of the Big Ten. (Next up: Jan. 17 at Penn State)

7. Michigan (10-6, 3-1, PPP: 1.02, PPP Allowed: .98) (Last week: 10) … Like clockwork, it appears the Wolverines are once again finding their form at the right time with wins over Penn State and Minnesota in the past week. Their struggles this season have been well-documented, but through the first four games of league play John Beilein’s squad is playing strong defense. And though their offense is nowhere near the level it has been in previous years, the Wolverines have been able to take care of the ball and get to the line effectively — a key to their strong start to 2015. (Next up: Jan. 13 at Ohio State; Jan. 17 vs. Northwestern)

6. Ohio State (13-4, 2-2, PPP: 1.06, PPP Allowed: 1.03) (Last week: 5) … No one in the Big Ten forces turnovers with the effectiveness of the Buckeyes, and combined with their top 50 offense and defense it has resulted in wins over Illinois and Minnesota. But close losses against Iowa and Indiana easily can be interpreted as missed opportunities, especially when the Buckeyes, in those games, forced 29 turnovers.  (Next up: Jan. 13 vs. Michigan; Jan. 17 at Iowa)

5. Indiana (12-4, 2-1, PPP: .96, PPP Allowed: 1.03) (Last week: 3) … After getting demolished on Monday in a 20-point loss in East Lansing, the Hoosiers rebounded with a big win in Assembly Hall over Ohio State on Saturday. The Hoosiers have not had the shooting successes of the non-conference season early in Big Ten play, but they have shown the ability to hold their own on the boards despite being undersized — a key to their two wins over Nebraska and Ohio State thus far. (Next up: Jan. 13 vs. Penn State; Jan. 18 at Illinois)

4. Iowa (11-5, 2-1, PPP: 1.10, PPP Allowed: 1.08) (Last week: 4) … The Hawkeyes took care of business early in the week against Nebraska before falling to a surging Michigan State squad on Thursday, but their win at Ohio State has to be held in high regard, as well. In addition to being one of the more experienced squads in the country, the Hawkeyes also have had one of the highest free throw conversion percentages this season. And through their first three games of conference play, the Hawkeyes have had a 58.6 percent free throw rate — meaning they are getting to the line better than everyone else in the league and, more importantly, are playing to their strengths. (Next up: Jan. 13 at Minnesota; Jan. 17 vs. Ohio State)

3. Michigan State (12-5, 3-1, PPP: 1.09, PPP Allowed: .93) (Last week: 9) … What a week it was for the Spartans. Following last week’s double overtime loss to Maryland in East Lansing, the Spartans came back with a 20-point win over Indiana, a 14-point win over Iowa in Iowa City and a seven-point win over Northwestern (albeit in overtime). And in that three-win span, senior Branden Dawson has taken on a dominant role – with 41 points and 37 rebounds. (Next up: Jan. 17 at Maryland)

2. Wisconsin (15-2, 3-1, PPP: 1.21, PPP Allowed: 1.05) (Last week: 1) …  There is no arguing that the Badgers are the top team in the league when at full strength and they also have the best chance in the league of getting to the Final Four this season. But the Badgers are nowhere near a perfect product — as evidenced in their loss at Rutgers on Sunday. Yes, they were missing Kaminsky and lost Jackson during the game, but the Badgers still have plenty of talent and plenty of depth to beat Rutgers in New Brunswick. After all, this was a team that lost to Saint Peter’s and St. Francis (Pa.) on the same court this season. (Next up: Jan. 15 vs. Nebraska)

1. Maryland (15-2, 3-1, PPP: .94; PPP Allowed: .88) (Last week: 2) …  It wasn’t a perfect week for the Terrapins, who lost their way in Champaign en route to their first Big Ten loss of the season. But against Purdue on Saturday, Maryland handled the Boilermakers’ physicality, played strong and resilient defense and willed its way to a nine-point win in West Lafayette. And for a young team that suffered a setback just days earlier, producing a response like that bodes well as conference action continues. (Next up: Jan. 14 vs. Rutgers; Jan. 17 vs. Michigan State)