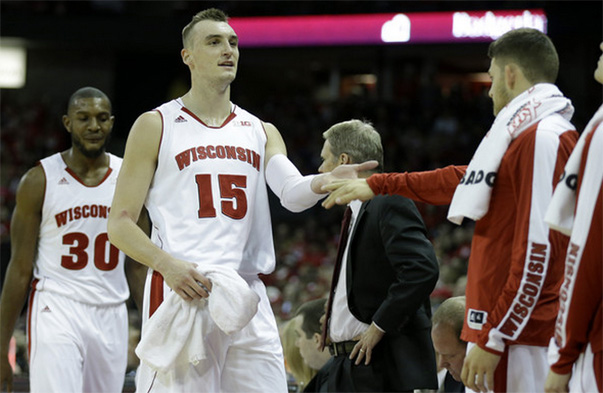 The Inside the Hall Big Ten Power Rankings are back for another season as conference action now is underway. Here’s a look at where each team stands following the first week of play in 2015:

14. Rutgers (9-6, 1-1) … One of the two additions to the Big Ten last July, the Scarlet Knights have never had much success in basketball — their last NCAA tournament appearance was in 1991, five years before current college freshmen were even born. The woes have continued into year two under coach Eddie Jordan, as they have suffered home losses to the likes of St. Francis (Pa.) and Saint Peter’s and boast the nation’s No. 271 offense and an effective field goal percentage in the bottom 30 in the country. But the Scarlet Knights have wins over Vanderbilt and most recently Penn State, showing glimpses of potential success in a wide open Big Ten this season. (Next up: Jan. 8 at Nebraska; Jan. 11 vs. Wisconsin)

13. Northwestern (10-6, 1-2) … In Chris Collins’s second year at the helm in Evanston, the Wildcats have yet to find any of the magic they had last season in what has been a lackluster start thus far. With another young squad, the 33rd-least experienced in the country, the Wildcats’ offense has once again been slow and inefficient — with their points per possession, effective field goal percentage, offensive rebound percentage and free throw rate ranking all in the bottom half of the country. And through the first half of the season, they have yet to be competitive against upper-tier teams, either — losing to its five top-100 opponents thus far at the closest by seven points and an average 14 points per game. (Next up: Jan. 11 at Michigan State)

12. Nebraska (8-5, 0-1) … Despite returning much of its 2013-2014 NCAA tournament squad, Nebraska has struggled immensely to start this season. The main difference: Its offense has been nowhere near as efficient as it was in 2013-2014 — averaging nearly 0.12 points per possession less. And after losing once in its new Pinnacle Bank Arena last season, Nebraska has already lost three times in its home arena, including one to the University of Incarnate Word. (Next up: Today at Iowa; Jan. 8 vs. Rutgers; Jan. 11 vs. Illinois)

11. Penn State (12-3, 0-2) … The Nittany Lions have had one of the surprise starts of the Big Ten — losing just once in the non-conference season for its best start since 1995-96. But their 12-1 record was perhaps deceiving, especially since they had the nation’s 32nd-least competitive non-conference slate according to KenPom.com. And with two losses to start their conference season, including one to Rutgers, it’s clear the Nittany Lions still have plenty of work to do to reach the upper echelon of the league. (Next up: Jan. 6 vs. Michigan)

10. Michigan (8-6, 1-1) … Nearly halfway into their season, perhaps the best explanation for the Wolverines’ preseason ranking has been its previous seasons’ successes. That’s because this year’s squad has shown little of the consistency that has made past Michigan squads so reliable. The Wolverines, who lost multiple players over the offseason to either the NBA (Nik Stauskas, Glenn Robinson, Mitch McGary), graduation (Jordan Morgan) or to other schools (Jon Horford to Florida), have the country’s 27th least experienced roster and have shot the ball at their poorest under head coach John Beilein since the 2009-2010 season. The byproduct of that: They have losses to NJIT and Eastern Michigan. But with wins over Syracuse and Illinois, the Wolverines have shown they have potential once again. It’s just a matter of reaching it, especially as the opponents get tougher. (Next up: Jan. 6 at Penn State; Jan. 10 vs. Minnesota)

9. Michigan State (9-5, 0-1) … After losing Adreian Payne and Gary Harris over the offseason, the Spartans found themselves without their two best players from a season ago and with another preseason top 25 ranking to live up to. Thus far, they have been unconvincing in that role. Their best win thus far has been Loyola Chicago — yes, the Ramblers — and they even inexplicably lost at home to Texas Southern just two weeks ago. Their five losses have been close, a combined 25-point margin, however the Spartans have yet to prove they can beat a top opponent in the country, let alone in the Big Ten. (Next up: Today vs. Indiana; Jan. 8 at Iowa; Jan. 11 vs. Northwestern)

8. Illinois (10-5, 0-2) … The Fighting Illini came into this season with high hopes, returning pieces like Nnanna Egwu, Malcolm Hill, Kendrick Nunn and Rayvonte Rice while adding the likes of Aaron Cosby, Ahmad Starks and Leron Black to the mix. But their start to the season has been slow — granted, like much of the Big Ten this season. The Illini had an impressive win over Baylor early, but since then they have been unconvincing, with losses to Miami (FL), Villanova and Oregon, games that could have put them a leg up in the Big Ten. And with two losses already to Michigan and Ohio State, the Illini find themselves at the bottom of the league standings — a position they likely did not expect to be in this season. (Next up: Jan. 7 vs. Maryland; Jan. 11 at Nebraska)

7. Minnesota (11-4, 0-2) … As with much of the Big Ten, the Golden Gophers had a number of chances to separate themselves during the non-conference season and came up short, beating Georgia but also suffering losses to St. John’s and Louisville. Those losses, though, are certainly nothing to hang their heads on, and they have both a top 50 offense and defense in addition to a top 50 team in experience. But through two games in conference action this season, the Gophers have not taken advantage of their opportunities on the road, losing to Purdue and Maryland. And who knows what effect missed chances will have on the NCAA tournament committee come Selection Sunday. (Next up: Jan. 6 vs. Ohio State; Jan. 10 at Michigan)

6. Purdue (10-5, 2-0) … There were few teams in the league that had as poor of a start to the season as the Boilermakers did. Losses to North Florida and Gardner Webb speak for themselves, after all. But since then, Matt Painter has his young team back on track with victories over Minnesota and Michigan to start the Big Ten season. Only Maryland and Wisconsin can also lay claim to two league wins thus far. And with the continued development of their young players, including A.J. Hammons, Isaac Haas, Kendall Stephens and Vince Edwards, the Boilermakers could feasibly continue their run in an otherwise weak Big Ten, although two stiff tests await this week. (Next up: Jan. 7 at Wisconsin; Jan. 10 vs. Maryland)

5. Ohio State (12-3, 1-1) … The Buckeyes have been one of the top teams in the league on an annual basis, and not much has changed following the departure of Aaron Craft. But against the top competition this season, the Buckeyes have been just a notch below the likes of North Carolina and Louisville and failed to hold home court against Iowa in their Big Ten opener. They have no bad losses to their name, but the Buckeyes have yet to impress against the better teams of the country. (Next up: Jan. 6 at Minnesota; Jan. 10 at Indiana)

4. Iowa (10-4, 1-0) … One of the very few Big Ten teams returning the majority of their starting five (only losing Roy Devyn Marble), the Hawkeyes came into this season with the advantage of experience in a league that simply does not have much of it. Thus far, though the on-court results have not been ideal, with losses to Northern Iowa, Iowa State, Texas and Syracuse, Fran McCaffery’s squad still has shown it can win big games, most recently on the road at Ohio State and last month in Chapel Hill against North Carolina in the ACC/Big Ten Challenge. And experience will only help down the line, too, as the season nears closer and closer to March. (Next up: Today vs. Nebraska; Jan. 8 vs. Michigan State)

3. Indiana (11-3, 1-0) … Just two months ago, many were wondering the future of Tom Crean after multiple off-court issues marred the Hoosiers’ start to the season. But those doubts have been quieted (for now), as the Hoosiers emerged from the non-conference season with wins over SMU, Pittsburgh and Butler and one of the nation’s top offenses — a rarity in the Big Ten this season. And although they have a young squad once again, the Hoosiers emerged from Lincoln with a win last Wednesday over Nebraska — proof they can be competitive this season away from Assembly Hall in the tougher environments of the Big Ten. (Next up: Today at Michigan State; Jan. 10 vs. Ohio State)

2. Maryland (14-1, 2-0) … This was supposed to be the make-or-break season for Mark Turgeon, and thus far the fourth-year Terrapins coach has put together a soaring start for the first-year Big Ten squad. They’re young — four freshmen see significant minutes — but the Terps shoot the ball well, defend well, get to the free throw line often and don’t foul often. It’s a recipe for success, and it has shown with wins already over Arizona State, Iowa State, Oklahoma State, Michigan State and Minnesota, teams all ranked inside the KenPom top 100. Its only loss: an 11-point game to former ACC foe Virginia. (Next up: Jan. 7 at Illinois; Jan. 10 at Purdue)

1. Wisconsin (15-1, 3-0) … It comes as no surprise that the Badgers come in at the top of the power rankings, as they never skipped a beat following last year’s Final Four appearance. It also helps that they returned nearly all of their team from last year. Frank Kaminsky is having a National Player of the Year caliber season thus far (averaging 16.6 points, 8.4 rebounds, 2.1 assists and 2.0 blocks per game), and overall the Badgers have the nation’s No. 2 offense at a whopping 1.19 points per possession rate. They also are the best in the country at not turning the ball over and keeping opponents off the glass. In short: It will be tough for any Big Ten team to beat the Badgers this season as they once again contend for the national title. (Next up: Jan. 7 vs. Purdue; Jan. 11 at Rutgers)