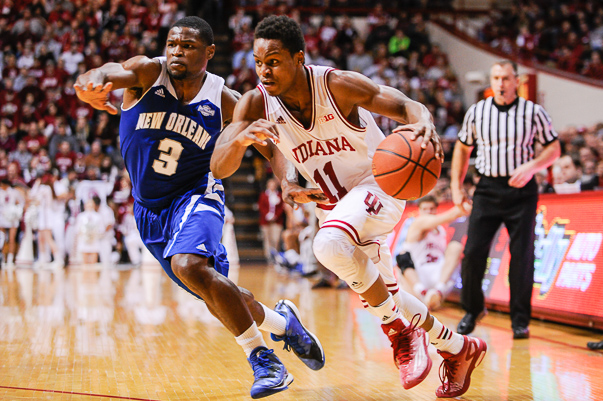 For the final six minutes of Monday night’s first half against New Orleans, Indiana coach Tom Crean saw exactly what he wanted from his players: unselfishness and strong defense.

After the Privateers got within four points of the Hoosiers with 6:05 remaining in the first half, the Hoosiers would go on an 18-0 run to close the half. The game, at that point, was decided.

“I mean our offense was really good in that six-minute stretch right there at the end of the first half,” Crean said. “Our defense was tremendous. And the more that they realize that the defense can make their offense really good, the better we’ll be, too, and they are getting there.”

Throughout much of the first half, New Orleans was set on slowing the pace of the game down. It’s something the Hoosiers expect to see a lot of come Big Ten season — but not something they were anticipating on Monday, Crean said.

With the Privateers playing competitive in the first 14 minutes of the game, it forced the Hoosiers to play more creative. New Orleans got its defenders back quickly and enticed Indiana into a half-court game. The Hoosiers had find ways to speed up the tempo of the game.

“Coach always strives on making the extra pass,” said junior Yogi Ferrell, who finished with a team-high 17 points. “So we just kind of wanted to get downhill drives, kicks to shooters; if we didn’t have a shot, just drive it over the top and just keep moving the defense, because eventually the defense will break down, and it felt like it did tonight. We got open shots.”

On the defensive end, too, the Hoosiers utilized a press and once again mixed defenses to speed up the game. In the final 6:05 of the first half, it worked to perfection.

After freshman James Blackmon Jr. started the run with a pull-up three-pointer, the Hoosiers forced six missed shots and three turnovers while converting on eight of their 11 trips down the floor. A 26-22 game had quickly escalated to an insurmountable 44-22 halftime margin.

“The last five, six minutes of the first half, we got a lot of stops in a row, which carried over to our offense and we all of a sudden got up 20-plus,” Ferrell said. “So I think that was the biggest thing.”

But Crean saw more significance out of the late-half run.

In that span, six Hoosiers scored. There were assists on three of the baskets, and there were no turnovers. And most importantly, Crean noticed, there was no “my turn” mentality.

Against Butler, the Hoosiers had to overcome a close margin late to win. Against New Orleans they had to increase the tempo against a team trying to slow them down (Indiana has played just four games this season with fewer possessions).

And with Big Ten season looming, the Hoosiers overcame yet another test.

“With this year’s team, if we can get consistent depth, we have got to be able to get the tempo faster when somebody wants to take time off the clock, whether we’re man or we’re zone,” Crean said. “So it was very good training for us tonight to build for what we could see in the next couple weeks.”