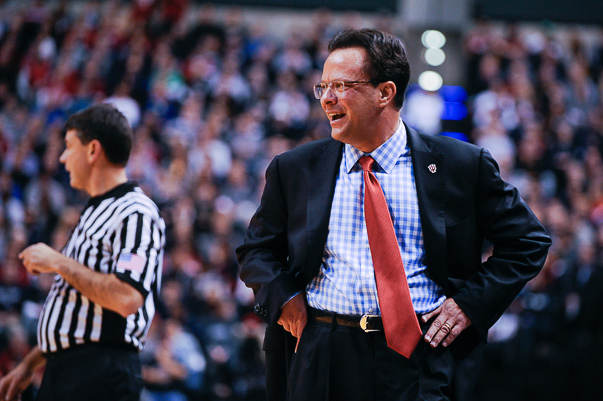 INDIANAPOLIS — As Indiana left the court at halftime on Saturday against Butler in Bankers Life Fieldhouse, the Hoosiers knew they had just blown an opportunity.

They led by ten points with just 3:44 remaining in the half. The scored was tied at the break.

But behind a 20-point second half effort from junior Yogi Ferrell, the Hoosiers pulled away a second time. And there was no looking back.

Indiana (9-2) won its second game against a ranked opponent this season, topping the No. 23 Bulldogs (8-3) by an 82-73 score in the fourth Crossroads Classic event.

“That was an extremely hard-fought victory,” Indiana coach Tom Crean said. “We knew it would be a great challenge, and we have a lot of respect for Butler. They are a ranked team, and they deserve that ranking. And I’m not sure I can find a lot of weaknesses in their game and in their team.”

Heading into Saturday’s game, Crean stressed the importance of being competitive on the boards against the Bulldogs. Butler, who recorded 28 offensive boards against North Carolina just weeks earlier, also had an offensive rebounding percentage ranked in the top 75 in the nation.

Early on in the game, though, the Hoosiers established dominance on the boards.

In the first half, they out-rebounded the Bulldogs by a 25-18 margin. While Indiana had 11 offensive boards, the Bulldogs had just four. And junior Hanner Mosquera-Perea led the way with five rebounds — along with three blocks.

The rebounding success resulted in a 37-27 lead at the 3:44 mark that quickly dissipated thanks to an 0-for-5 finish from the field (and three missed free throws) and an 11-1 Butler run in the same span. All the first-half progress the Hoosiers made was gone.

“We got a little carless with the 10-point lead,” Crean said. “Our transition defense wasn’t as good, a couple fouls that didn’t need to happen and we shot a little quick without getting it through the paint. In the second half we didn’t have any of that.”

Just after the lead was stretched to six, Ferrell drained a 3-pointer on the ensuing possession. It was his first basket of the game.

Ferrell had been benched for the majority of the first half with two fouls and zero points in just nine minutes of action. His first point came on a free throw with 17:04 to go and his first field goal on the 3-pointer with 13:37 remaining to trim Butler’s lead. He went on to play 19 of the 20 second-half minutes.

“Guys were trying to just tell me to take over the game,” Ferrell said. “So I was just trying to look for my shot, drives, kicks, whatever we needed.”

And Indiana kept the foot on the accelerator. Both teams traded baskets and misses up until the 5:25 mark while the Hoosiers maintained their rebounding advantage. Sophomore Troy Williams led the Hoosiers with 11 rebounds, while Mosquera-Perea finished with nine and James Blackmon Jr. with eight. The Hoosiers would win the rebounding battle, 48-40.

But with the game still tight at 66-65 following a Butler turnover, a full-sprint Williams found junior Nick Zeisloft in the corner for a 3-pointer to make the score 69-65. Butler would turn it over on the next possession, as well — Bulldogs interim coach Chris Holtmann said the Hoosiers’ switching defenses multiple times throughout the game had an effect on the team — and Williams would again find his way to the basket for a layup in transition.

“Today seemed like a day where you had to get to the basket and run it in transition,” Williams said. “And if I did that it would be hard to stop me. That’s exactly what I tried to do.”

The Indiana lead would never get smaller than five points again.

After a final Butler 3-point miss (it was 3-of-16 from behind the arc) and a final Williams rebound with seven seconds left, the Hoosiers were able to celebrate.

Ferrell — who on Saturday also became the 48th 1000-point scorer in Indiana history — looked to the Hoosiers fans in Bankers Life Fieldhouse and raised his arms as the game-ending buzzer sounded. There would be no collapse.

“We knew we were going to have to play an extraordinary game,” Crean, who won his 300th career game, said. “And we did. We didn’t play what I would call a 40-minute game, we had some lulls at the end of the first half after we got up 10 that we’d certainly like to have back.

“But we learned from it, and we responded in the second half.”