Win against SMU a sign Indiana is ‘growing up’ 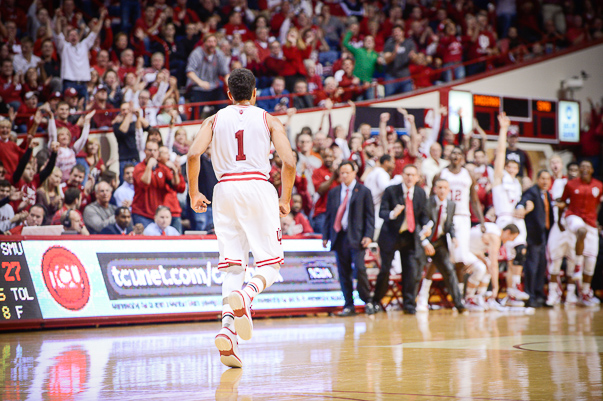 As Tom Crean spoke following his team’s 74-68 win over No. 22 SMU on Thursday night, the emotion in the voice of the seventh-year Indiana coach was noticeable and powerful.

Minutes earlier, his team had just completed an upset of the nationally-ranked Mustangs. His team that had nine newcomers to start the season. His team that faced so much adversity in the weeks leading up to the season — with the Devin Davis and Emmitt Holt car accident and the Troy Williams and Stan Robinson suspensions. His team that dealt with public doubts from fans, media and alumni.

On Thursday, in front of an anxious yet electrified crowd in Assembly Hall, it all reached a crescendo. This time, though, the adversity came on the court.

Early in the game, the Hoosiers were overmatched. They could not get the ball in the paint, whatsoever. The Mustangs forced them into a slow-paced game and pounded them on the boards. The score, at the 10:51 mark of the first half, was 22-10 in SMU’s favor.

Indiana faced similar struggles throughout Thursday’s game. SMU grabbed 33.3 percent of its misses and scored 10 second chance points. The Hoosiers allowed 24-of-37 SMU two-point baskets. Even with Robinson and Williams making their debuts, they did not swing the rebounding deficit in the Hoosiers’ favor.

All that adversity Indiana had dealt with off the court was matched on the court against SMU.

“The thing with adversity, you’re going to go one or two ways with it,” Crean said. “It’s either going to break you or it’s going to bond you.”

On Thursday night, the Hoosiers bonded.

Despite the early deficit, the Hoosiers clawed back into the game with 3-point shooting and gutsy driving toward the rim. They kept a high-tempo offense to counter SMU’s efforts to drag them into a slower-paced game. They forced fouls. They also stepped up a notch defensively.

The Hoosiers utilized a 1-3-1 zone to draw 19 SMU turnovers. Indiana, meanwhile, committed just seven for a turnover percentage of 10.4. It was the Hoosiers’ lowest in a game since a 77-67 loss to Wisconsin on March 3, 2011.

“The difference is making the easy plays,” junior Yogi Ferrell said. “In the game, we didn’t force anything. We just kind of moved the ball, picked different spots for us. I think that’s the biggest thing. The coaches always harp on making the simple play. I feel like we did that tonight.”

Though SMU kept the game in their control and nearly forced multiple runs, the Hoosiers remained in the game — never allowing the Mustangs to pull away. The Hoosiers made the big shots when they needed to. They kept calm as SMU continued to knock on the door.

“Give them credit, they’re really unselfish,” SMU coach Larry Brown said. “They play real hard. I think they are a fun team to watch.”

All that paid off at the final buzzer when the Hoosiers emerged with their third victory in as many games.

After weeks of turmoil and months of uncertainty on how the Hoosiers would perform when the competition level became tougher — given so much roster turnover over the offseason — this Indiana squad passed its first test with flying colors.

“All in all,” Crean said, “a very good win, a very impressive win for our team.”

The road ahead still remains long; there are plenty more worthy opponents looming in the near future.

But there now is a different aura surrounding the Hoosiers. There is confidence.

“When you get a team that bonds like that, that’s going to be important,” Crean said. “And we can grow. We’re still young in so many areas.”