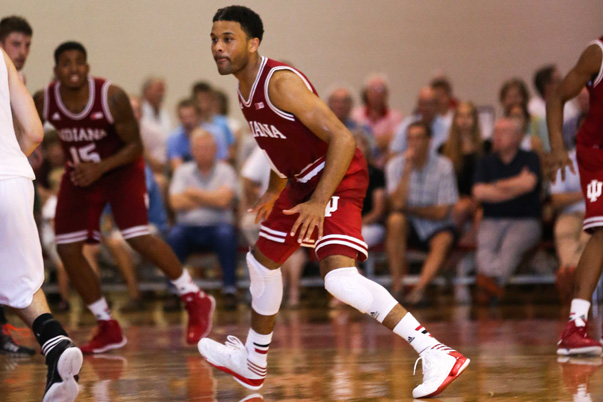 With the official start of practice less than four weeks away, Inside the Hall and UMHoops have again partnered to bring you a preseason breakdown of the top 25 players in the Big Ten for the 2014-2015 season.

Dez Wells is the top returning player for Mark Turgeon and the Terps as the program enters the Big Ten, but an argument can be made that Trimble, a McDonald’s All-American who chose to stay close to home, is the team’s most important player. On a roster that was rocked by transfers in the offseason, Turgeon is planning to slot Trimble in as the team’s point guard after the departure of Seth Allen, who transferred to Virginia Tech. The Upper Marlboro native was a big-time scorer (23.1 ppg) in high school at Bishop O’Connell, but will need to be more of a distributor capable of running the offense as Maryland looks to bounce back from a disappointing 17-15 season.

After spending his first three seasons in Columbus as a role player, Thompson should take over at the three for LaQuinton Ross, who made a questionable decision to enter the NBA draft. Thompson is the leading returning scorer for Ohio State and will need to prove he’s capable of more than just scoring off of dunks as the Buckeyes lost a ton of production with the departures of Ross, Aaron Craft and Lenzelle Smith. With increased minutes and slight improvement in areas like free throws and 3-point shooting, Thompson should be able to expand into a double-digit scorer to go along with his impact on the defensive end, the calling card for Ohio State under Thad Matta.

Cobb missed the entire 2012-2013 season due to a suspension, but returned as a junior and quietly put together a solid season. The departure of Drew Crawford means that Cobb could emerge as the featured scorer for second-year coach Chris Collins. Northwestern had the Big Ten’s least efficient offense last season and the addition of a solid recruiting class should help Cobb and Tre Demps, another holdover from the Bill Carmody era. With his size and ability to handle the ball, Cobb is one of the more difficult backcourt matchups in the league, but needs to become more efficient to make a leap into the upper echelon of the Big Ten’s best. As a junior, he shot just 45.5 percent on 2s and 35.2 percent on 3s. Little is expected of the Wildcats, but if they are to surprise, Cobb will need to play a major role.

Scott is arguably the best perimeter defender in the Big Ten and would be higher on the list if he possessed a more well-rounded game. His steal percentage as a junior ranked ninth nationally at 4.9 percent and he was also a solid distributor with an assist rate of 25.5. Both figures were very similar to those of Craft, who Scott should take over for on a full-time basis. Pairing Scott with incoming freshman D’Angelo Russell in the backcourt should allow him to stick to mostly playing the role of distributor and defensive stopper, but his woeful 3-point shooting (26-of-86 for 30.2 percent) and high turnover rate (22.2) are two areas where he really needs work going into his final season.

The second freshman to appear on the list, Blackmon Jr. arrives in Bloomington as a player who is wired to score. He averaged a team-high 18.8 points on IU’s trip to Canada in August and Scout.com listed him as the top incoming shooter in the country. His addition should help the Hoosiers rebound from an average season of perimeter shooting and spread the floor for point guard Yogi Ferrell, who was the constant focus of opposing defenses last season. As is the case with many freshman, Blackmon Jr. will have to adjust to the rigors of the college game, but his body has undergone some transformation already since his arrival on campus in June as he’s closing in on 200 pounds. There’s little doubt that Blackmon Jr.’s shooting and ability to score should translate from day one, but ultimately how high he lands on this list at season’s end will be determined by how well he defends and how he makes his teammates better.