The Minute After: The University of Ottawa 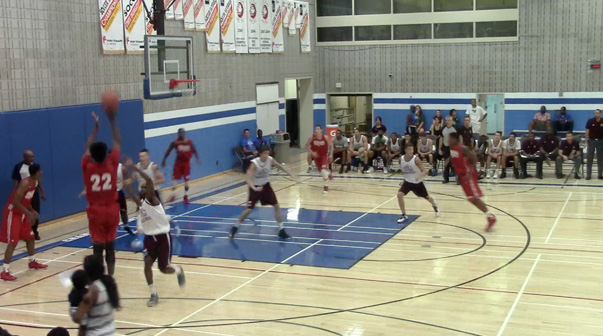 SAINT-LAMBERT, Quebec — Thoughts on a 109-101 loss to the University of Ottawa:

Indiana’s third opponent on its Canadian tour, Carleton University, received most of the pre-trip buzz as a team capable of knocking off the Hoosiers. The Ravens are a perennial power in Canada with a ridiculous 292-14 mark over their last 306 contests.

But the University of Ottawa, arguably the top challenger currently to Carleton in the quest for Canadian Interuniversity Sport titles, got the first crack of the two schools to beat Indiana.

And that’s exactly what happened. This was no gimmick win nor was it a fluke. It was just two talented offensive teams making shot after shot. Unfortunately for IU, the Gee Gees just happened to make more on this particular afternoon.

You can start with the discrepancy on 3-pointers as the major downfall for Indiana. The Hoosiers hit 7-of-17 from distance while the University of Ottawa hit 18-of-30 from behind the arc.

The Gee Gees shared the ball brilliantly, moved it with purpose and found shooters, of which they have plenty. Their backcourt, which is certainly one of the best in the country, combined for 54 points as Johnny Berhanemeskel and Mike L’Africain each poured in 27. L’Africain hit six 3s and unofficially, dished out six assists.

Making matters more difficult for Indiana was Vikas Gill, a frontcourt player for Ottawa who is able to step out and flat out fill it up. He hit 7 of his 8 attempts from distance and many of the shots were unchallenged. Failing to challenge shots, particularly on the perimeter, was a theme of the day for IU and ultimately its undoing. The Gee Gees are a savvy, experienced group that can execute a game plan, so it’s not particularly alarming that on this afternoon they were able to pull out a victory.

The positives on the afternoon for Indiana were mostly on the offensive side of the ball.

Tom Crean experimented a bit with his backcourt as he featured several ball handlers other than Yogi Ferrell and mentioned postgame that the guys who are able to get the ball up the court following a made basket for the opposition will be pivotal for this IU team which is likely to run.

Unofficially, the Hoosiers had just 12 turnovers on the afternoon (that number may be adjusted after IU goes through the film and releases a more official box), but there weren’t many careless mistakes despite the brisk pace of the game.

Troy Williams again showed signs that he’s grown considerably in the offseason as he was 12-of-16 from the field for 27 points and again had a variety of dunks and putbacks around the basket that are a staple of the game. But beyond that, Crean seems to have more confidence putting the ball into the hands of Williams and letting him go to work off the dribble and the sophomore wing is rewarding his coach with production so far on this foreign tour.

James Blackmon Jr. was more assertive in his second game north of the border, totaling 20 points on 8-of-14 shooting. For as much a Blackmon Jr. has been touted as a perimeter shooter, he was equally good today at getting into the lane and creating opportunities inside the arc. He admitted to being more comfortable postgame, but quickly flipped the conversation to defense when asked about his scoring output.

Equally impressive was the play of sophomore Stanford Robinson, who showed off a new right handed jumpshot that Tom Crean says he’s been working on and comes more naturally for the sophomore guard. Robinson was also strong off the dribble in the first half and finished with 16 points.

Yogi Ferrell struggled with his shot (3-of-11) and finished with just seven points as did Robert Johnson, who was 3-of-10 for eight points. As a team, Indiana also missed some costly free throws — the Hoosiers were 12-of-20 on the afternoon — that could have ultimately changed the outcome.

All in all, it was an afternoon of growth and learning for a young Indiana team that needs it at this point in early August. Indiana still has a long way to go and is missing its primary post presence in Hanner Mosquera-Perea on the trip. But through two games in Canada, this team has showed off an offensive punch that will win games come winter provided the defense gets to where it needs to be.

And as far as the trip goes, there’s no rest for the weary as the Hoosiers will head to Ottawa tomorrow for a meeting with mighty Carleton.