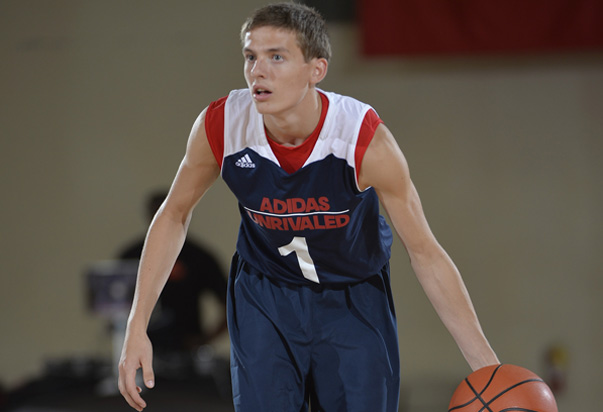 REDONDO BEACH, Calif. — Since his freshman year of high school at Lawrence Central, 6-foot-2, class of 2016 guard Kyle Guy has noticed a shift in his game.

“I’ve become a lot more confident in the rest of my game,” he noted on Thursday to Inside the Hall. “My freshman year I just sort of shot a lot of threes, and now I’m trying to expand my game, be more of a point guard.”

On Thursday, at the Battle at the Beach, thousands of miles from Indianapolis, Guy was able to showcase his newfound confidence in front of many college coaches — including Indiana associate head coach Tim Buckley and coaches from California and Oregon State, among others — for Indiana Elite.

“I had actually never heard of him before this, but he can play,” Guy said. “It was surreal to be out there playing like that. It was great competition.”

It was in front of colleges who have shown significant interest, too.

Oregon State, Guy said, has been recruiting him hard recently. California, too, has shown interest. And the Golden Bears could be close to joining Ole Miss in schools to recently offer Guy.

“Hopefully by the end of July I’ll be able to answer that better,” he said. “But that’s what I’m out here playing to do.”

Guy said Colorado and Oregon are other schools pushing hard at the moment, while he hopes to visit Xavier and Louisville in the near future. Butler and Purdue are involved in his recruitment, too.

And Indiana, Guy said, is “right up there at the top” with other schools recruiting him.

“I love IU basketball,” he said. “I’m obviously from Indiana, so you can’t not like it.”

Guy will have one more chance to impress college coaches this summer and showcase his newfound confidence at the adidas Super64, running from July 23-27 in Las Vegas.

Rated the No. 118 prospect nationally in the 247Composite, he was the leading scorer this spring for Indiana Elite (12-4) in the adidas Gauntlet, averaging 14.3 points per game.