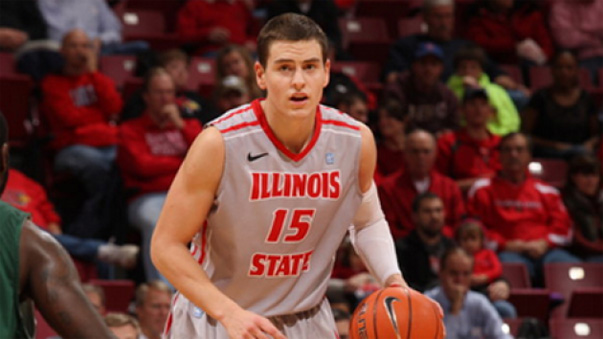 Indiana announced the addition of Nick Zeisloft on Monday, a 6-foot-4 guard that transferred from Illinois State University.

Zeisloft will be a redshirt junior this upcoming season and will be eligible immediately after he graduated from ISU in just three years. The La Grange, Ill., native averaged 6.9 points per game last season in 30 starts, also making 60 3-pointers on 169 attempts (35.5 percent). Only one Hoosier made more 3-pointers last season — rising junior Yogi Ferrell, who made 88.

“The addition of Nick allows us to spread and space the floor even more and play with more pace,” Indiana coach Tom Crean said, according to a press release. “More importantly, we are adding a young man that has been raised well and has been well coached throughout his career. He brings a physical and mental toughness that has allowed him to play at a strong level and brings leadership and maturity to our program.”

The full IU release, which also features quotes from Zeisloft, is available after the jump.

Bloomington, Indiana – Indiana University men’s basketball coach Tom Crean has announced the addition of graduate student Nick Zeisloft, a 6-4 guard who earned a degree in Finance from Illinois State, to the Hoosiers roster. He will have two years of eligibility.

“The addition of Nick allows us to spread and space the floor even more and play with more pace,” said Crean. “More importantly, we are adding a young man that has been raised well and has been well coached throughout his career. He brings a physical and mental toughness that has allowed him to play at a strong level and brings leadership and maturity to our program.”

Zeisloft played two seasons for the Redbirds and was a career 37.3 shooter from three-point range. He made 60 three-pointers last season and shot 41.8 percent from long distance as a freshman, making 28 of 67 from three-point range. He also is an outstanding free throw shooter making 90.0 from the line last season and takes care of the basketball with a career assist/turnover ledger of 50 assists to 28 turnovers. He was a team captain and was a First Team All-MVC Scholar-Athlete last season.

Zeisloft is from La Grange, Illinois and attended Lyons Township High School in 2011.

“The fact that he wanted to be in the Kelley School graduate program says a lot about his strength of character and his excitement to be a Hoosier.”

With the return of junior Yogi Ferrell who led the Big Ten in three-pointers per game and what is perhaps the best shooting class in the Class of 2014 with the addition of James Blackmon, Jr., Robert Johnson, Max Hoetzel and Tim Priller, IU will look to build on its three-year major conference leading total in three-point percentage (39.6). As far as experience, Zeisloft has made 88 of 236 three-point attempts for his career.

“Coach Crean was very honest with me about what I could achieve at Indiana and I appreciate that,” said Zeisloft. “I think I can bring leadership, experience and shooting ability to this team. I really enjoyed my visit and was impressed with how hard they work out and how they communicate with one another. I think I can be there for these guys as a teammate and always have their back.”

“We feel his best basketball days are ahead of him and his versatility and skills allow him to be very multi-dimensional for us,” added Crean. “We feel he compliments our returners very well and will help in the development and growth process of our newcomers.”

Proud to be a part of @IndianaMBB! Can't wait to get on the court with my new teammates! #Hoosiers