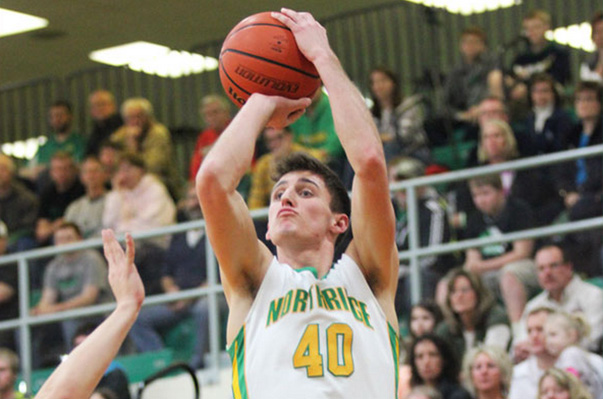 A pair of frontcourt players, one with Division I scholarship offers and one with playing experience at a major Division II program, are expected to walk-on next season at Indiana.

Nate Ritchie (pictured), who averaged 23.8 points and 7.4 rebounds per game last season at Northridge, announced on his Twitter account earlier today that he would be a preferred walk-on.

“I am blessed to say I will officially be playing basketball for Indiana University this coming fall, as a preferred walk on,” Ritchie wrote.

The 6-foot-7 Ritchie had offers from Air Force and Toledo and interest from other Division I programs. Northridge finished 18-3 last season, falling 67-62 to Concord in Class 4A sectional play.

Another Indiana native, Ryan Burton, who played two seasons (2011-2012, 2012-2013) at Bellarmine University in Louisville, is also joining the program as a walk-on.

Burton, a 6-foot-7 forward who played high school at Bedford North Lawrence, played in 58 games over two seasons at Bellarmine, where he averaged 4.1 points and 1.6 rebounds in 13.1 minutes per game.

As a senior at Bedford North Lawrence, Burton averaged 11 points and six rebounds as the Stars finished 18-2 and won the Hoosier Hills Conference.