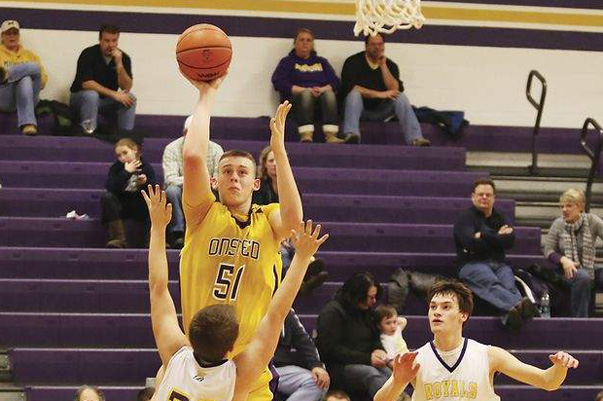 One of the top rising juniors in Michigan made a trip to Bloomington on Monday for an unofficial visit and left with a very favorable impression of the Indiana program, according to his high school coach.

Austin Davis, a 6-foot-10, 240 pound center from Onsted, got his first look at the Indiana program along with his parents and coach, Brad Maska.

“We were blown away. It was very impressive. The whole college package (is there) with Indiana,” Maska told Inside the Hall. “Obviously with the tradition in basketball, that speaks for itself. The beauty of the campus itself was amazing, the dedication to academics that they showed right from the start was very impressive, the strength and conditioning, it was just a great opportunity.

“I know Austin and both of his parents were very impressed with everything. The coaches were great, it was a family atmosphere.”

As a sophomore at Onsted, Davis averaged 21.6 points, 15 rebounds and three blocks per game. He was named first team all-state by the basketball coaches of Michigan and The Detroit Free Press. At just 15 years old with a 7-foot wingspan, Davis has grown six inches since his eighth grade year and it’s often a challenge for big men to continue making adjustments while growing rapidly.

Maska believes his big man, who has early scholarship offers from Central Michigan and Toledo, is meeting that challenge head on.

“As an eighth grader, he was 6-foot-4 and 270 and he is where he’s at now basically because of his time and effort,” he said. “Skill wise around the basket, he can go left hand and right hand, he can do it all. His foot quickness and things like that are obviously things that we’re always going to continue working on with a big guy. But as far as his ball skills, hand-eye coordination, it’s pretty impressive as it is right now.”

July will be an important month for Davis, who will participate in the adidas Uprising camp in Chicago during the first evaluation period and will then play with the Michigan Mustangs for the final two evaluation periods. Many of the schools who are recruiting him, including IU, will get a chance to get a clear evaluation in July and decide where he fits into their recruiting plans.

“Indiana hasn’t seen him play live,” Maska said. “They’re very excited about the things he can do, but they just gotta get an opportunity to see him play live. That’s kind of what their goal is, from what we took away, in July.

“They’ve seen tape and they got to meet him and see what kind of kid he was, but I think the next step is seeing him play and seeing him do the things that everyone says. They want to see him live, I think, in order to make a real good evaluation.”