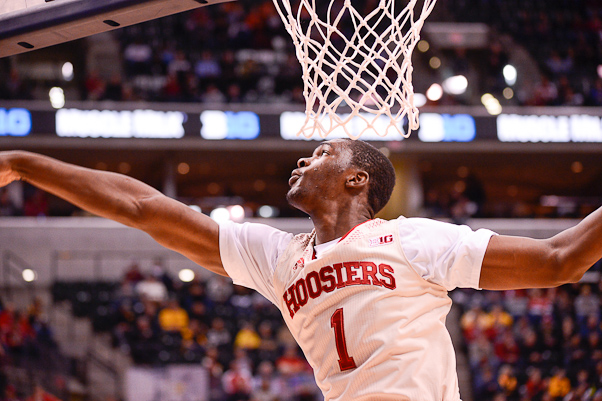 The lottery for the 2014 NBA draft took place on Tuesday night in New York and for the second straight year, the Cleveland Cavaliers landed in the top spot.

The complete order for the lottery is as follows:

Indiana forward and Big Ten freshman Noah Vonleh was among the expected lottery picks in attendance last night at the lottery and here’s an updated look at where he’s being projected to go in next month’s draft:

· Chad Ford of ESPN.com: No. 5 to Utah: “Vonleh’s ability to stretch the floor should be intriguing to the Jazz.”

· Marc Spears of Yahoo! Sports: No. 6 to Boston: “Scout’s take: “He’s young [18 years old] and he has huge hands. He has a big body and he can shoot from outside, but he is not a great athlete.”

· Sam Smith of Bulls.com: No. 10 to Philadelphia: “Could the Bulls persuade them to take their two picks to move up for a shooter? You assume the Bulls would try. But with their developing kiddie corps he’s a smart versatile big man who will fill a position.”

· Chris Mannix of Sports Illustrated: No. 9 to Charlotte: “Vonleh is projected to be a solid rebounder and defender, but he has also shown flashes of an untapped offensive game. Consider: Last season Vonleh made 48.5 percent (16-of-33) from three-point range. He’d benefit from working with excellent big man tutors in Charlotte coach Steve Clifford and assistant Patrick Ewing.”

· Jonathan Givony of Draft Express: No. 7 to Los Angeles Lakers: “With the Lakers frontcourt rotation potentially in flux this offseason, Noah Vonleh would provide them with a long-term answer at the power forward position as Pau Gasol hits unrestricted free agency. Measuring 6-8 without shoes with a 7-4.5 wingspan, Vonleh has impressive physical tools, is a tremendous rebounder, and has some promising tools offensively.”

· Scott Howard-Cooper of NBA.com: No. 6 to Boston: “Vonleh can play physical inside or step outside and hit shots from the perimeter, a promising start after one season as one of the fast-risers on the board. He is going in a very good direction.”

· NESN.com: No. 6 to Boston: “We’ve been fighting an internal debate for weeks on whether Vonleh or Marcus Smart gets the edge here. Smart’s turnaround time to adjust to the NBA is likely shorter, but the 18-year-old Vonleh has demonstrated the beginnings of some promising fundamentals and skill for his size. All other things being equal, it’s usually best to go with the big man over the potential stud guard.”