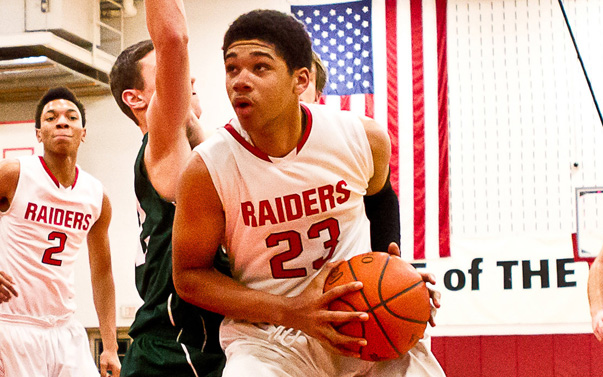 The 6-foot-7 forward was named the player of the year for the Northeast Lakes District and Associated Press for Division I in Ohio. He averaged 26.5 points, 11.5 rebounds, 3.5 assists, two blocks and two steals per game.

But even with close to 20 scholarship offers, Ahmad is keeping things in perspective.

“It’s been big. It’s been a great experience,” he told Inside the Hall at the Hensley Memorial Run-N-Slam Classic. “But you’ve got to stay humble. And that’s what I’ve been trying to do.”

Interest in Ahmad has come from all across the country.

Though playing in the Big Ten is definitely something that appeals to Ahmad, he’s keeping his mind and his options open.

Ahmad, a teammate of class of 2015 target Jalen Coleman with All-Ohio Red this spring on the Nike EYBL Circuit, is off to a strong start in what is regarded as the top AAU league in the country. At the first EYBL session in Sacramento, Ahmad averaged 13.3 points and 9.7 rebounds per game.

“It’s been going good,” Ahmad said. “We’ve been on a roll and we’ve beaten some of the top teams in the country. It’s been a good spring for us.”

Indiana entered the mix for Ahmad with a scholarship offer in March and he said he spoke to Tom Crean on the phone as recently as last week. The Hoosiers are making a push to get the talented forward, ranked as the No. 63 prospect nationally in the 247Composite, on campus for a visit this spring or summer.

“I’ve got a good relationship with them,” he said. “They just want to get me down to visit the campus and get a feel for it. Right now they’re looking at me as a point forward. I’m just trying to get down there and visit.”

The player development and recent success of getting players to the NBA at Indiana is something that has drawn the interest of Ahmad, he acknowledged. Indiana is expected to have its third lottery pick in two years next month in Noah Vonleh, who follows Victor Oladipo and Cody Zeller from last year.

“I want to go somewhere where they get their players to the NBA and develop players,” Ahmad said. “That’s a big thing for me.”