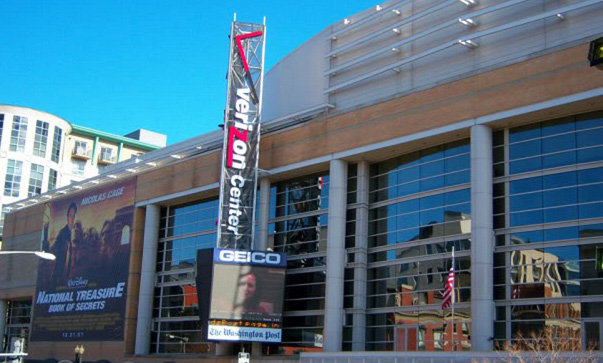 Early Monday evening, the Big Ten issued a press release that it would have an announcement on Tuesday afternoon at 1 p.m. ET at Washington D.C.’s Verizon Center.

It hasn’t taken long for the details of that announcement to leak as Big Ten commissioner Jim Delany confirmed to SI.com’s Steward Mandel that the 2017 Big Ten tournament will be played in the nation’s capital. The news was first reported by Justin Albers.

According to Mandel’s report, the event will start “moving around more frequently, much like the ACC’s.”

“My expectation is you’ll see it moving among and between venues in the Midwest and Northeast,” Delany told Mandel. “You’ve got to figure out a pattern. I expect that over the next 10 years you’re going to see us in both regions of the country.”

The Big Ten tournament, which started in 1998, has never been played outside of Chicago or Indianapolis.

Rosemont, Ill. — The Big Ten Conference announced today that the Big Ten Men’s Basketball Tournament will make its first appearance on the East Coast when the 2017 event is held at the Verizon Center in Washington, D.C. The 2017 Big Ten Men’s Basketball Tournament will mark the conference’s 20th annual event and will feature all 14 conference institutions in action from Wednesday, March 8, through Sunday, March 12, with the winner earning the Big Ten’s automatic berth to the NCAA Tournament.

“We’re thrilled to announce plans to host the Big Ten Men’s Basketball Tournament in Washington, D.C.,” said Big Ten Commissioner James E. Delany. “We have a great amount of respect for basketball in this region of the country and are pleased that we were able to place this tournament at the Verizon Center at this first possible opportunity in March 2017.”

“We’re very excited the Big Ten Conference has selected our nation’s capital as the site for the 2017 Big Ten Men’s Basketball Tournament,” said University of Maryland Director of Athletics Kevin Anderson. “This is yet another example of the Big Ten’s commitment to our region and provides fans of Maryland and all conference teams on the East Coast easier access to enjoy this outstanding event.”

“We are looking forward to and are honored to host the Big Ten Tournament here in Washington, D.C. for the very first time,” said senior vice president and general manager of Verizon Center, David Touhey. “The excitement that surrounds this conference event is unparalleled and with Maryland becoming a part of the fold officially next season, the tournament is sure to have some added local flair here in the nation’s capital.”

The Big Ten Men’s Basketball Tournament has been held in either Chicago or Indianapolis through the first 17 years of its existence, and returns to Chicago’s United Center for the ninth time in 2015. Indianapolis’ Bankers Life Fieldhouse will host the tournament for the 10th time in 2016. Each of the last two tournaments have been sold out, including a conference record of more than 124,000 fans at the United Center in 2013 and over 111,000 fans at Bankers Life Fieldhouse earlier this year, the largest attendance in Indianapolis. More than 1.6 million fans have enjoyed the tournament since the inaugural event in 1998.

Six different programs have won the Big Ten Men’s Basketball Tournament – Illinois, Iowa, Michigan State, Ohio State, Purdue and Wisconsin – while 10 different schools have advanced to the championship game. History has indicated that any team, regardless of seed, can advance to the title game, as the final matchup has featured teams seeded as high as first, second and third and as low as eighth, ninth, 10th and 11th.

Verizon Center is a 20,000-seat multi-purpose sports and entertainment venue, owned and operated by Monumental Sports & Entertainment (MSE), in downtown Washington, D.C. The arena is home to three professional sports teams, also owned by MSE, the NBA’s Washington Wizards, NHL’s Washington Capitals and WNBA’s Washington Mystics. Hosting an average of 220 events per year, inclusive of games, concerts, family shows and world-class sporting events, Verizon Center sits at the heart of an $8.1 billion redevelopment of downtown that began 16 years ago when the arena opened.

The Big Ten has made a series of announcements highlighting the conference’s increased presence on the East Coast, beginning with the addition of Maryland and Rutgers as future conference members in November 2012. Last June, the Big Ten announced the acceptance of Johns Hopkins University as the conference’s first sport affiliate member for men’s lacrosse and also announced an agreement to take part in the New Era Pinstripe Bowl, sending conference football teams to play at Yankee Stadium on an annual basis. In April, the Big Ten announced that it would open a second office in New York City while securing access to satellite office space in Washington, D.C. And yesterday in Madison Square Garden, the conference unveiled plans to take part in the Gavitt Tipoff Games, an annual early-season men’s basketball series with the Big East named in honor of Dave Gavitt, founder of the Big East and basketball visionary.

Maryland and Rutgers are set to officially join the Big Ten on July 1, 2014, giving the conference more than 520,000 total students and 5.7 million living alumni. The broad-based athletic programs of the 14 institutions will feature almost 9,500 student-athletes on 350 teams in 43 different sports. With the debut of men’s and women’s lacrosse during the 2014-15 academic year, the Big Ten will sponsor 28 official sports. Maryland and Rutgers are already members of the Committee on Institutional Cooperation, an academic consortium of Big Ten universities and the University of Chicago that is a model for effective and voluntary collaboration among top research universities. In 2012, Big Ten institutions produced over $9.5 billion in research expenditures.