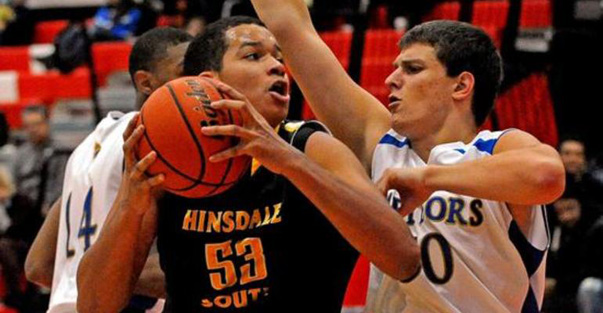 On a busy weekend of evaluations at four different events across the country, the Indiana coaching staff saw plenty of talent that it hopes to add to future recruiting classes.

One of those players is class of 2016 Hinsdale South (Ill.) center Barret Benson, who visited last fall for Hoosier Hysteria and was scouted by director of basketball operations Rob Judson over the weekend at the Jayhawk Invitational near Kansas City. Judson was filling in as the fourth member of the staff on the road following the departure of Kenny Johnson.

At 6-foot-9 and 240 pounds, Benson is rated the No. 74 prospect nationally in his class by the 247Composite and his list of scholarship offers is expected to grow this spring and summer.

Last night, Benson spoke with Tom Crean, who extended an offer to come play in Bloomington.

“I’m really excited. Indiana is a great program, obviously, a historic Big Ten basketball program,” Benson told Inside the Hall. “(It has) great academics and it’s just really exciting for me to get an offer from a great school like Indiana.”

Indiana was in to see Benson in an open gym the week before the Jayhawk Invitational and in his conversation last night with Crean, the two talked about how he could fit in with the Hoosiers.

“I talked to coach Crean and he said he really likes my style of play, he told me about Noah Vonleh and Cody Zeller,” Benson said. “Those are the same guys that played the type of position that I’d be playing at Indiana. He talked about how successful they’re going to be after playing in college. They like that I can score, defend and rebound and help other people score.”

“I thought it was a good high school season,” Benson said. “This year, the team needed me more as a scorer than a role player like last year. So I stepped up scoring, rebounding and defense this year. Just did whatever I could to help us win.”

He said IU, Kansas State, Northwestern and Purdue have been the schools most active with him in recent weeks. With a busy spring and summer ahead playing with the Under Armour affiliated Illinois Wolves program, Benson is looking forward to playing against some of the best players in the country.

“I think I’ve really improved on my aggressiveness overall offensively and my aggressiveness defensively as well with blocking some shots,” he said. “Just developing my body is one of the big steps this offeason that I need to work on and keep persistently working on.”