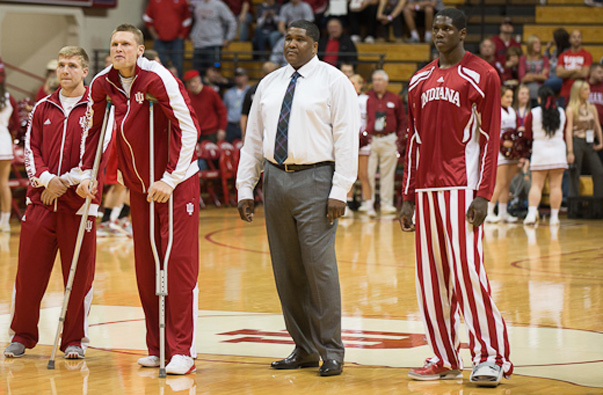 Indiana assistant coach and recruiting coordinator Kenny Johnson is leaving the program for an assistant coaching job at Louisville, according to multiple reports late Monday evening.

The news was first reported by Jeff Ermann of InsideMDSports.

Johnson, who came to Bloomington from Towson in May of 2012, spent two seasons with the program.

A native of Oxon Hill, Md., Johnson was the associate head coach at Paul VI Catholic High School in Fairfax, Virginia for four years prior to joining the Towson staff.

His strong ties to the east coast helped Indiana over the last two years on the recruiting trail as the Hoosiers landed commitments from Max Hoetzel, Noah Vonleh, Robert Johnson, Stanford Robinson and Troy Williams.

He replaces Kevin Keatts, who was hired as the head coach at UNC-Wilmington, on the Louisville staff.

Johnson’s departure is just the third by an assistant coach since Tom Crean took over in April 2008. Roshown McLeod was dismissed in March of 2010 and Bennie Seltzer was hired by Samford in April of 2012.

Update (Wednesday, 11:45 a.m.): Indiana just released a statement from Crean regarding the departure of Johnson:

“We appreciate all that Kenny Johnson added to the Indiana basketball program over the last two years and we value his friendship. We have loved having Kenny, Doreen, Amare, and Mekai as part of the Indiana family. I was always hopeful Kenny would not leave until he became a head coach, but I think this offer was too big to turn down. We have a lot of history together and he leaves with our support and appreciation for a job well done.”