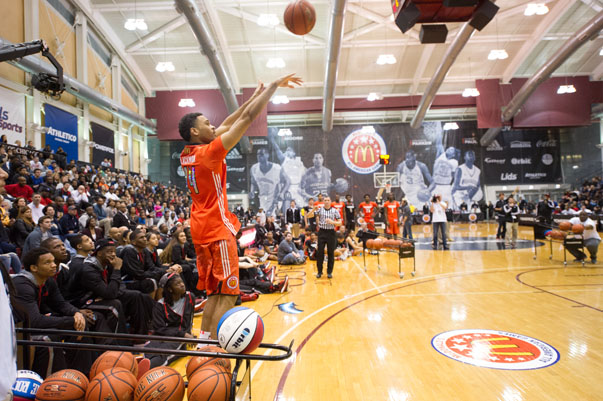 McDonald’s All-American week is off to a very good start for Marion guard James Blackmon Jr.

The future Hoosier then beat Tennessee signee Alex Middleton in the boys’ vs. girls’ 3-point shootout, 20-19.

The McDonald’s All American Game will air live Wednesday night at 9:30 p.m. ET on ESPN.

He visited Bloomington in early March for IU’s win over Ohio State.

The Detroit News first reported the offer and Bloomfield Hills coach Duane Graves later confirmed it to Inside the Hall’s Jordan Littman.

Based on comments made by Graves to The Detroit News, the offer from the Spartans may be a game-changer in his recruitment.

“When we first started this recruiting process, Michigan State was No. 1 on his board,” Graves told The Detroit News. “But MSU didn’t have a scholarship available then. Now they do. This is awesome.’

Maten took an official visit to Bloomington over the weekend that concluded yesterday.

Indiana senior Will Sheehey will play in the 2014 Reese’s Division I All-Star game on Friday in Arlington, Texas, the National Association of Basketball Coaches announced today.

Sheehey will play for Maryland coach Mark Turgeon on the East roster. The game will be played at AT&T Stadium at 4:30 p.m. local time and will be shown on tape delay on Saturday, April 5, from 12-2 p.m. EDT on CBS.

Northwestern’s Drew Crawford will play on the West team, which will be coached by Stanford’s Johnny Dawkins.

The teams are composed of senior student-athletes in NCAA Division I.