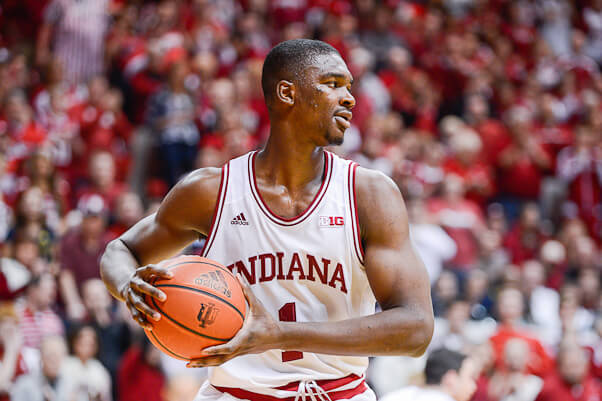 Noah Vonleh finished the regular season as the Big Ten freshman of the year and averaged 11.4 points and 9.1 rebounds per game. He was also named third team All-Big Ten by the coaches and the media.

At just 18 years old, his long term potential continues to make him a frequent topic of discussion amongst those who cover the NBA draft, with most projections slotting him into the top 10 if he decides to go pro.

In our latest edition of draft watch, we take a detailed look at where Vonleh’s stock stands heading into postseason play:

· Analysis: Since our last update in late January, Vonleh moved up in each of the four big board rankings we’re currently tracking. ESPN and Draft Express each moved him up one spot, NBA Draft.net moved him up 11 spots and Sports Illustrated elevated him by three spots.

There was plenty to like about Vonleh’s play in the Big Ten. First off, he hit 15 of his 25 attempts from behind the 3-point arc and finished the conference season with an effective field goal percentage of 57. He was also the Big Ten’s best rebounder at 8.8 per game and his defensive rebounding percentage of 26.8 ranked second in the conference.

On the flip side, Vonleh only had seven assists total in Big Ten games and his field goal percentage on 2s (48.4) is a lot lower than what you’d expect out of a 6-foot-10 player. His free throw rate, measured by free throws attempted divided by field goals attempted, was just 43.3 percent. By comparison, as a freshman, Cody Zeller had 31 assists in Big Ten play, made 61.6 percent of his 2s and had a free throw rate of 61.6 percent.

As we mentioned in our January update, one major factor that Vonleh will have to consider is the potential benefit of coming back for another season and entering what figures to be a less top heavy draft in 2015. For example, the No. 3 pick this June stands to earn approximately $5.3 million more than the No. 10 pick over his first three seasons in the league.

· Expert Opinion: “With his 7-4 wingspan and terrific 242-pound frame, Vonleh has the body, length and intensity-level needed to compete on the interior in the NBA. He shows some ability to score both inside and out, flashing hook shots over either shoulder and range out to the 3-point line, but does not have the skill-level or aggressiveness needed to be a consistent scorer at the college level yet.

Vonleh has made over half of his 3-pointers on the season, but takes less than one attempt per game, which indicates he still has plenty of work to do in this area. Additionally, he lacks elite explosiveness as a shot-blocker and finisher around the basket, and ranks as one of the poorest passers in this draft class, posting the worst assist to turnover ratio (now second worst) and assist per possession rate, to go along with the third worst PPR, which could be an issue as he transitions from the center spot collegiately to the power forward position in the NBA.” – Draft Express.