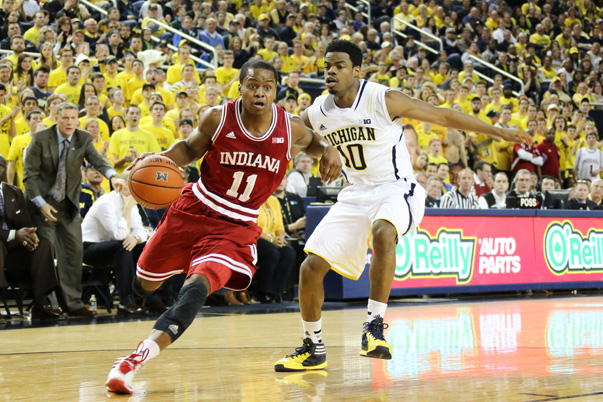 The Big Ten will announce its All-Big Ten teams and awards later tonight, but here’s the Inside the Hall staff’s selections for the various honors that will be handed out:

Comment: The first four selections were no-brainers, but the last slot went to Irvin over Troy Williams, Stanford Robinson and Purdue’s Kendall Stephens because he played valuable minutes on a team that finished 15-3 and he made 42.6 percent of his 3s in league play. Irvin was also the fourth most efficient freshman.

Comment: The Buckeyes land two players on our all-defensive team for anchoring the Big Ten’s best defense. Morgan hasn’t received enough credit for helping hold things together in the post for the Wolverines after the loss of Mitch McGary. Despite playing for last place Purdue, Hammons led the conference in blocks.

Comment: The closest call was between Ferrell and Marble for first team honors and it really could have gone either way, but no Big Ten team depended more on a player than Indiana did Ferrell, so he received the nod for the final spot.

Comment: Michigan’s John Beilein was plenty deserving of this award as the Wolverines won the conference outright by three games without McGary. Miles gets the nod, however, because he took the Cornhuskers, picked by many to finish last in the conference in the preseason, to an 11-7 record and a probable NCAA tournament bid.

Comment: Vonleh missed two games, but he’s the runaway winner for this award because of his ability to dominate the glass and also score in a variety of ways. Statistically, no other freshman in the league really came close to his numbers.

Comment: Hayes earned the trust of Bo Ryan, who typically doesn’t like to play freshmen, very early in the season and averaged close to 10 points in league play for the Badgers, who finished second in the standings.

Comment: At one point, this was a close race between Stauskas and Harris, but the sharpshooter from Canada pulled away late as the Wolverines proved they were the league’s best team from start to finish. Michigan was great in the Big Ten because of its ability to score efficiently and Stauskas’ effective field goal percentage of 59.7 was a major reason why.