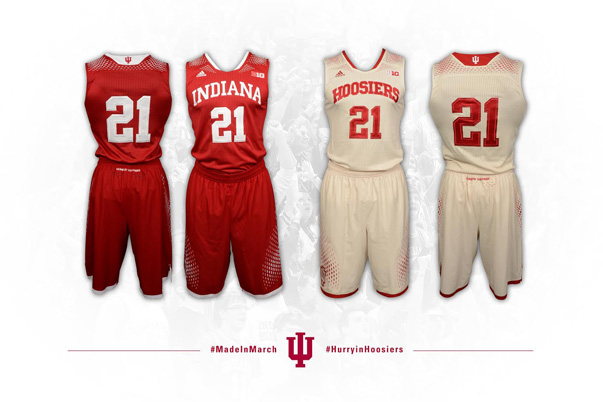 Indiana has teamed up with adidas and will debut new uniforms for Big Ten tournament play beginning next Thursday in Indianapolis.

Here are the full details:

BLOOMINGTON, Ind. – IU Athletics and adidas have partnered to pay tribute to the unique history of IU basketball with special edition “Hurryin’ Hoosiers” Made In March basketball uniforms that will be worn at the Big Ten Tournament in Indianapolis on March 13th. These uniforms feature IU’s traditional cream and crimson color scheme, with the fabled “Hurryin’ Hoosiers” nickname placed on the inside collar of each jersey and on the back of the shorts. These Made in March uniforms will be worn exclusively during the Big Ten Tournament.

“Our players are excited to have something that will be unique to their time at Indiana,” said IU Coach Tom Crean. “Great traditions like the candy stripe pants, the script Indiana, and the names not being on the back of their jerseys, are timeless and we are proud to uphold those every day.”

The collection was created to provide the Hoosiers with adidas’ most advanced uniform system and basketball apparel technology so they can take on the challenges of the intense play of March.

“Particularly given that our current style of play is reminiscent of the “Hurryin’ Hoosier” teams of the great Branch McCracken era, it is highly appropriate for our team to don these uniforms as a fun meld of our beloved and storied tradition with cutting edge design and uniform technology,” said Indiana University Vice President and Director of Intercollegiate Athletics Fred Glass. “It is no secret that we have shied away from special uniforms that depart dramatically from our traditional look. We are so appreciative to adidas for working with us to develop these fun and exciting, yet tradition-based uniforms,” said Glass.

Made in March Uniforms feature a functional perforated print pattern along the leg of the stretch woven short to enhance breathability and ventilation, keeping players cool as the clock winds down. adidas’ quick-drying jersey technology found in current NBA uniforms along with ClimaCool zones on the chest, back and side, move heat and moisture away from the body to keep the jersey light and dry during as players sweat.

The Made in March Uniform System debuts on-court beginning with conference tournament play and fans can grab their Made in March gear at adidas.com and campus bookstores.