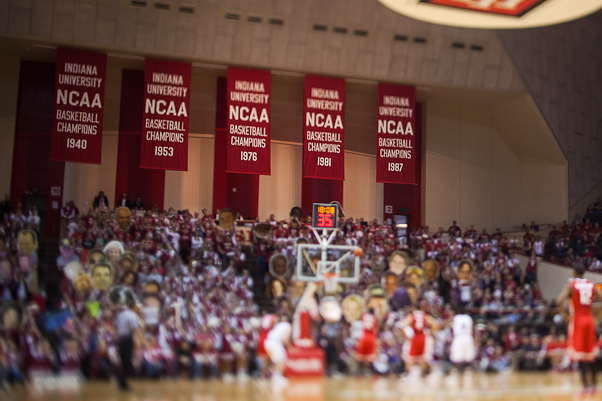 The Inside the Hall Big Ten Power Rankings are back as we enter the final week of conference play. This week’s rankings feature a couple shake-ups in the top four and several throughout the bottom seven, as we head into the final stretch of what has been a thrilling regular season.

Without further ado, check out where each team stands after week nine of league play:

11. Purdue (15-14, 5-11, PPP: 1.0, PPP Allowed: 1.07) (LAST WEEK: 8) … It’s hard to look past the Boilermakers’ loss to Michigan this past week, in which the Boilermakers had every opportunity to knock out the Big Ten leader. But the Wolverines came storming back, forced overtime without ever even holding a lead in the game and won on a last-second lay-up from Glenn Robinson III. And the Boilermakers followed that with a deflating loss at Iowa on Sunday in which they, again, got close and couldn’t finish the deal. Purdue, this season, doesn’t have one win over a team ranked in the KenPom.com top 50. They’re the only Big Ten team without one. (Up next: March 5 at Wisconsin, March 9 vs. Northwestern)

10. Penn State (14-15, 5-11, PPP: 1.0, PPP Allowed: 1.08) (LAST WEEK: 11) … Last week in our power rankings, we mentioned how it might be tough for the Nittany Lions to win another game this season. Well, on Thursday, against an Ohio State squad that had won six of its past seven games, the Nittany Lions did just that in a 65-63 shocker over the Buckeyes. D.J. Newbill and Tim Frazier again carried the Nittany Lions, and they held firm when Ohio State had the chance to win at the end of regulation. Not to mention, it gave the Nittany Lions the season sweep of the Buckeyes. (Up next: March 6 at Northwestern, March 9 at Minnesota)

8. Illinois (17-12, 6-10, PPP: .95, PPP Allowed: 1.0) (LAST WEEK: 10) …  It took quite a while, but this, perhaps, is the Illinois team we’ve been waiting to see all along. With two wins over a hot Nebraska team at home and a stout Michigan State squad in East Lansing, the Fighting Illini find themselves on a three-game winning streak, having held opponents to less than 50 points in four straight games. The Illini’s offense has been slow to come around, but with the defense stepping up, they certainly are on the up-swing heading into the final week of the season. (Up next: March 4 vs. Michigan, March 8 at Iowa)

7. Indiana (17-12, 7-9, PPP: .99, PPP Allowed: 1.02) (LAST WEEK: 9) … There was a stretch this season, that as of a few weeks ago, the Hoosiers had lost six of their previous eight games. That streak is no more with the Hoosiers having won three of their past four, including two straight over ranked opponents in Iowa and Ohio State. Still, with no road wins to boast outside of Penn State and Northwestern, an NCAA tournament bid remains a long shot for the Hoosiers. (Up next: March 5 vs. Nebraska, March 8 at Michigan)

6. Nebraska (17-11, 9-7, PPP: .98, PPP Allowed: .99) (LAST WEEK: 6) … Wednesday’s loss at Illinois was a bit of a let-down as the freight train that had been Nebraska basketball suddenly slowed down after an off night from Terran Petteway and Shavon Shields. But the Cornhuskers picked it right up on Sunday and grinded out a win against Northwestern. With just two games to go before the Big Ten tournament, it will be crucial for the Cornhuskers to pick up at least one more win if they want to keep their NCAA tournament hopes alive. (Up next: March 5 at Indiana, March 9 vs. Wisconsin)

5. Ohio State (22-8, 9-8, PPP: 1.02, PPP Allowed: .96) (LAST WEEK: 5) … After Sunday’s loss at Indiana, Buckeyes coach Thad Matta admitted his team has a bit of a confidence issue right now. After two straight losses to Penn State and Indiana after scares the week before against Northwestern and Minnesota, it’s not difficult to see why. The Buckeyes’ offense struggled, especially, against the Hoosiers, but they will get one more chance to rebound before traveling to Indianapolis with a rematch against Michigan State on Sunday. (Up next: March 9 vs. Michigan State)

4. Michigan State (22-7, 11-5, PPP: 1.10, PPP Allowed: 1.01) (LAST WEEK: 3) … It’s been mentioned time and time again how injuries have derailed Michigan State this season. That perhaps, we’ll never get to see the full potential of this Spartans squad. Well, on Saturday, the Spartans got Branden Dawson back but still struggled immensely in a 53-46 loss — at home — to Illinois. Michigan State started this season 18-1. But since, they are just 4-6, limping to the end of the season with a tough final two games still to play before the Big Ten tournament next week.(Up next: March 6 vs. Iowa, March 9 at Ohio State)

3. Iowa (20-9, 9-7, PPP: 1.13, PPP Allowed: 1.05) (LAST WEEK: 4) … The Hawkeyes had a rough stretch this past week that included two losses (at Minnesota and at Indiana) in which opponents scored a combined 188 points. And both those games were in regulation. But this late in the season, it’s important for teams to bounce back, and the Hawkeyes did just that with a win at home over Purdue on Sunday.  But heading into their final two games of the regular season, defense remains a glaring issue for Fran McCaffery’s squad. (Up next: March 6 at Michigan State, March 8 vs. Illinois)

2. Wisconsin (24-5, 11-5, PPP: 1.13, PPP Allowed: 1.04) (LAST WEEK: 2) … The Badgers are on a tear, and it appears nobody can stop them. Even trailing by 10, at home, to Indiana early last week, the Badgers kicked into another gear and ran the Hoosiers out of the Kohl Center in a 69-58 win. And at Penn State on Sunday, though the Nittany Lions played them close, the Badgers got the big shots to fall in a 71-66 victory in State College. And with two very winnable games this week, the Badgers have the chance to finish the regular season on a nine-game winning streak. (Up next: March 5 vs. Purdue, March 9 at Nebraska)

1. Michigan (21-7, 13-3, PPP: 1.15, PPP Allowed: 1.07) (LAST WEEK: 1) … Big Ten champions. Who would have thought, after the Wolverines’ loss to Charlotte on Nov. 24, that Michigan would have a two-game lead on the rest of the Big Ten with one week to go? But here is John Beilein’s squad, guaranteed at least a share of the Big Ten regular season title with the conference’s No. 1 offense and two opportunities this week to clinch the outright title. (Up next: March 4 at Illinois, March 8 vs. Indiana)