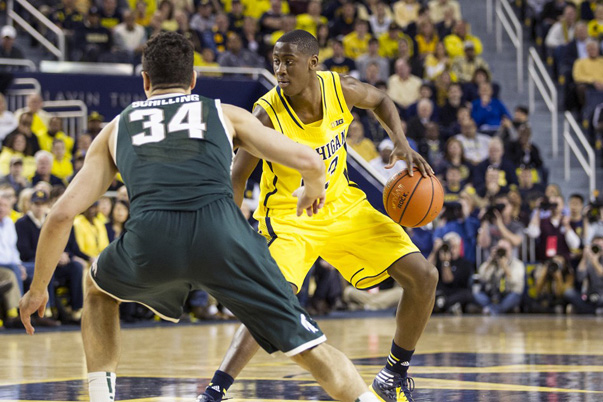 The Inside the Hall Big Ten Power Rankings are back for another week as the end of conference play nears. This week’s rankings feature stability at the top and more shake-ups in the bottom six as we head into the final stretch of the regular season.

Without further ado, check out where each team stands after week eight of league play:

12. Northwestern (12-16, 5-10, PPP: .89, PPP Allowed: 1.04) (LAST WEEK: 9) … Just a couple weeks ago, the Wildcats were 5-5 in the conference and were fourth in the Big Ten standings. It was a nice story for Chris Collins and company in his first year in Evanston, but injuries and a simple lack of elite talent have caught up to the Wildcats. They have now lost five straight, as finding wins in February were not easy to come by. (Up next: March 1 at Nebraska)

10. Illinois (15-12, 4-10, PPP: .94, PPP Allowed: 1.02) (LAST WEEK: 12) …  The Fighting Illini haven’t had the smoothest of seasons, but they did pick up a huge win and confidence booster on Wednesday at Minnesota. They started the second half hot and never looked back, and with it picked up their second road win in their past three games away from the State Farm Center. Ironically, though, Illinois hasn’t won at home since Jan. 4, and has a chance to clinch an overall winning record against Nebraska in Champaign on Wednesday. (Up next: Feb. 26 vs. Nebraska, March 1 at Michigan State)

9. Indiana (15-11, 5-8, PPP: .98, PPP Allowed: 1.01) (LAST WEEK: 11) … As rocky of a season as it’s been for the Hoosiers (which included last Tuesday’s postponement of a scheduled game vs. Iowa), Saturday’s win at Northwestern gave them some positive momentum. The Hoosiers shot well, didn’t turn the ball over and played solid defense, all pretty important factors to winning a basketball game. And the result: The Hoosiers left Evanston with their second road victory this season. (Up next: Feb. 25 at Wisconsin, Feb. 27 vs. Iowa, March 2 vs. Ohio State)

8. Purdue (15-12, 5-9, PPP: .99, PPP Allowed: 1.06) (LAST WEEK: 8) … Just over a week ago, the Boilermakers lit up Mackey Arena in an 82-64 win over the rival Hoosiers, but that seems like long ago after this past week’s results. Purdue allowed Michigan State to shoot lights out (the Spartans scored 1.4 points per possession) in West Lafayette on Tuesday in a 94-79 loss, and traveling to Lincoln on Sunday, the Boilermakers scored their third-fewest points of the season in a 76-57 blowout loss to Nebraska. And with two more tough games this week, things won’t get much easier for Matt Painter’s squad. (Up next: Feb. 26 vs. Michigan, March 1 at Iowa)

7. Minnesota (17-11, 6-9, PPP: 1.03, PPP Allowed: 1.07) (LAST WEEK: 7) … Two losses this past week to Ilinois and Ohio State did not do the Golden Gophers much good in terms of their NCAA tournament aspirations. With two of their final three games against teams ranked in the top 20, the Gophers certainly have the chance to pick up one or two more signature wins before the NCAA tournament selection committee decides their fate three Sundays from now. (Up next: Feb. 25 vs. Iowa, March 1 at Michigan)

6. Nebraska (16-10, 8-6, PPP: .99, PPP Allowed: 1.0) (LAST WEEK: 6) … There are certainly some streaking teams in the Big Ten right now, including Ohio State and Wisconsin, but the hottest team might be the Cornhuskers. After starting the Big Ten season 0-4, Tim Miles has his team as winners of eight of their past 10 games. And suddenly, an NCAA tournament bid isn’t out of the question with just four regular season games to go. (Up next: Feb. 26 at Illinois, March 1 vs. Northwestern)

5. Ohio State (22-6, 9-6, PPP: 1.04, PPP Allowed: .96) (LAST WEEK: 5) … The Buckeyes took care of business this week against Northwestern and Minnesota, despite a couple scares early on in each of those games. But they won each game with ease and by double digits. And now, the Buckeyes, who boast the conference’s No. 1 defense, are starting to return to the form they had in their 15-0 start to the season, as Thad Matta’s team has now won six of its past seven. (Up next: Feb. 27 at Penn State, March 2 at Indiana)

4. Iowa (19-7, 8-5, PPP: 1.13, PPP Allowed: 1.02) (LAST WEEK: 4) … Preparing for a road game — including traveling hundreds of miles for it — only for it to never happen throws a wrench in a team’s routine, and that is exactly what happened when the Hawkeyes left Bloomington on Tuesday without having actually played. And now the Hawkeyes, who are coming off a tough loss at home to Wisconsin, have to deal with three more games this week, including two on the road in a three-day span. (Up next: Feb. 25 at Minnesota, Feb. 27 at Indiana, March 1 vs. Purdue)

3. Michigan State (22-6, 11-4, PPP: 1.12, PPP Allowed: 1.02) (LAST WEEK: 3) … The Spartans got ahead early in Ann Arbor on Sunday, but the younger Wolverines squad pulled away late as the Spartans simply couldn’t stop the trio of Caris LeVert, Glenn Robinson III and Nik Stauskas. Injuries have plagued the Spartans all season, from Gary Harris to Adreian Payne to Keith Appling to Branden Dawson, and with just three games to go to decide the Big Ten regular season title, we’ve yet to see the true potential of this Michigan State squad. (Up next: March 1 vs. Illinois)

2. Wisconsin (22-5, 9-5, PPP: 1.13, PPP Allowed: 1.04) (LAST WEEK: 2) … Frank Kaminsky’s huge shot late in Saturday’s game at Iowa was huge for the Badgers. Coming off almost a week’s worth of rest following last Sunday’s dominant win at Michigan, the Badgers won, yet again, in another tough road environment in Iowa City. After falling to a 4-5 mark in the Big Ten, the Badgers have responded brilliantly with five straight wins (three of which have come against ranked opponents). And they still have an outside shot at a piece of the Big Ten title with four games to go. (Up next: Feb. 25 vs. Indiana, March 2 at Penn State)

1. Michigan (19-7, 11-3, PPP: 1.16, PPP Allowed: 1.08) (LAST WEEK: 1) …The Wolverines are all alone at the top of the Big Ten. This was a team that had lost its backcourt to the NBA before this season even began and its sophomore sensation and starting center to injury before the start o , but with four games remaining until the end of the regular season, the Wolverines are once again in the mix to win the conference regular season title. LeVert and Derrick Walton have emerged as worthy replacements to Tim Hardaway Jr. and Trey Burke, and Stauskas and Robinson have continued to improve. They might be the least-experienced team in the league, but John Beilein has it on the verge of its first outright Big Ten title since 1986. (Up next: Feb. 26 at Purdue, March 1 vs. Minnesota)