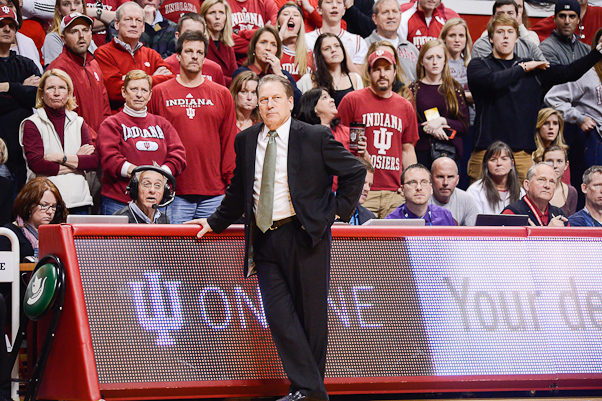 The Inside the Hall Big Ten Power Rankings are back for another week as conference play is now into full swing. This week’s rankings feature a new No. 1 and another set of shake-ups after a wild week in conference action. Check out where each team stands after the third week of league play.

12. Penn State (9-10, 0-6, PPP: .96, PPP Allowed: 1.10) (LAST WEEK: 11) … This wasn’t necessarily an easy week for the Nittany Lions, and they emerged with an 0-2 record and a six-game losing streak. They did only lose at Purdue by one, but again the Nittany Lions couldn’t close out the Boilermakers at the most important of moments. A matchup with Nebraska on Thursday, though, will give the Nittany Lions their best chance yet of picking up their first Big Ten win. (Up next: Jan. 23 vs. Nebraska)

10. Northwestern (9-10, 2-4, PPP: .84, PPP Allowed: 1.05) (LAST WEEK: 12) … Last week, it came as a positive sign that Northwestern beat Illinois at home. Perhaps things were trending in the right direction early in the Chris Collins era, after all. This past week, the Wildcats backed up their performance against the Illini, allowing only 54 points to Michigan State in a home loss and even upsetting Indiana in Bloomington in a 54-47 victory. Their defense, especially, has been impressive in their past three games. If the Wildcats can simply find some offense, they could pull out a few more Big Ten wins. (Up next: Jan. 21 vs. Purdue, Jan. 25 vs. Iowa)

9. Illinois (13-6, 2-4, PPP: .96, PPP Allowed: 1.04) (LAST WEEK: 7) … The free fall continues for the Illini. After two losses last week — one a drubbing at Wisconsin and another an embarrassing loss at Northwestern, the Illini had the chance to at least stop their slide with two home games against Purdue and Michigan State. They couldn’t win either one. Illinois started its Big Ten season 2-0, but four straight losses have fans wondering if this team might not be NCAA tournament bound after all. (Up next: Jan. 23 at Ohio State, Jan. 26 at Indiana)

8. Indiana (12-6, 2-3, PPP: .99, PPP Allowed: 1.06) (LAST WEEK: 8) … Consistency is a key part of most successful college basketball teams. Indiana has yet to figure out the true meaning of the word. After what was thought to be a signature win on Tuesday against Wisconsin, something that might have changed the momentum of their season, the Hoosiers followed it with a home loss to Northwestern  — a 47-point performance, their worst offensive output since Feb. 25, 2010. So much for that. (Up next: Jan. 21 at Michigan State, Jan. 26 vs. Illinois)

7. Purdue (13-5, 3-2, PPP: 1.04, PPP Allowed: 1.03) (LAST WEEK: 9) … Give Purdue credit: They took care of business this week. Though it wasn’t necessarily a smooth ride, the Boilermakers came away with victories at Illinois and at home against a driven Penn State team that nearly pulled off the win in West Lafayette. But the upset never happened, and Matt Painter has his team riding a three-game win streak at the moment. At least the Boilermakers are beating the teams they should beat. (Up next: Jan. 21 at Northwestern, Jan. 25 vs. Wisconsin)

6. Minnesota (14-5, 3-3, PPP: 1.05, PPP Allowed: 1.09) (LAST WEEK: 6) … The Golden Gophers have proven they can battle with any team after their performances this week, upsetting Ohio State in a 10-point win at home on Thursday and then staying close at Iowa on Sunday before the Hawkeyes pulled away in the second half. The Gophers might not contend for a Big Ten title in Richard Pitino’s first season, but he certainly has a team that could hear its name called on Selection Sunday. (Up next: Jan. 22 vs. Wisconsin, Jan. 26 at Nebraska)

5. Ohio State (15-3, 2-3, PPP: 1.03, PPP Allowed: .98) (LAST WEEK: 4) … The slide has continued for Thad Matta and the Buckeyes, as they lost their third straight game on Thursday in Minneapolis against the Golden Gophers. It was a 10-point loss, too, as the Buckeyes didn’t lead in the final 12:28 and were even down as many as 14 points late. A loss at Nebraska tonight would mean four straight losses for the Buckeyes, certainly something fans in Columbus could not have predicted only two weeks ago when this team was an undefeated 15-0. (Up next: Jan. 20 at Nebraska, Jan. 23 vs. Illinois)

4. Wisconsin (16-2, 3-2, PPP: 1.17, PPP Allowed: 1.03) (LAST WEEK: 1) … The Badgers were at the top of our Big Ten Power Rankings for one week, but two losses to Indiana and Michigan send Bo Ryan’s team falling in this week’s standings. In Bloomington on Tuesday, the Badgers simply couldn’t connect late in the second half and allowed an inexperienced Hoosiers squad to cement an upset win at Assembly Hall. And even against Michigan on Saturday in the Kohl Center, the Badgers could never really compete with the Wolverines. In fact, the Badgers allowed Michigan to shoot a whopping 61.3 eFG% in Madison. (Up next: Jan. 22 at Minnesota, Jan. 25 at Purdue)

3. Michigan (13-4, 5-0, PPP: 1.18, PPP Allowed: 1.03) (LAST WEEK: 5) … OK, so this Michigan team is quite good, even without Mitch McGary. Saturday’s seven-point at Wisconsin was extremely impressive, as the Wolverines were really in control throughout and remain one of only two undefeated teams in Big Ten play. And everyone knows how difficult it is to return from Madison with a win. John Beilein has his team shooting lights out once again, as his team is averaging a 60.9 eFG% clip in five league games. But with games against Iowa and Michigan State this week, the Wolverines’ will be tested against the league’s top two teams. It would be an understatement to say emerging with two victories would be huge for the nation’s 17th-least experienced squad. (Up next: Jan. 22 vs. Iowa, Jan. 25 at Michigan State)

2. Iowa (15-3, 4-1, PPP: 1.13, PPP Allowed: .96) (LAST WEEK: 3) … With a week to prepare for Sunday’s game against Minnesota, the Hawkeyes started slowly but eased their way to their 15th win of the season in a dominant second-half performance against the Golden Gophers. This is, without doubt, a dangerous Hawkeyes squad that ranks in the top 10 in the nation in points, assists and rebounds per game. It is certainly an NCAA tournament team. Fran McCaffery has built a winner in Iowa City. (Up next: Jan. 22 at Michigan, Jan. 25 at Northwestern)

1. Michigan State (17-1, 6-0, PPP: 1.10, PPP Allowed: .90) (LAST WEEK: 2) … The Spartans have finally clinched the top spot in our power rankings after Wisconsin lost twice this past week and the Spartans won twice on the road against an improving Northwestern team and an Illinois squad desperate for momentum. Both games were won by double digits. Even without Adreian Payne, the Spartans are rolling, and wins against Indiana and Michigan at home this week will only help them gain more confidence down the line. (Up next: Jan. 21 vs. Indiana, Jan. 25 vs. Michigan)