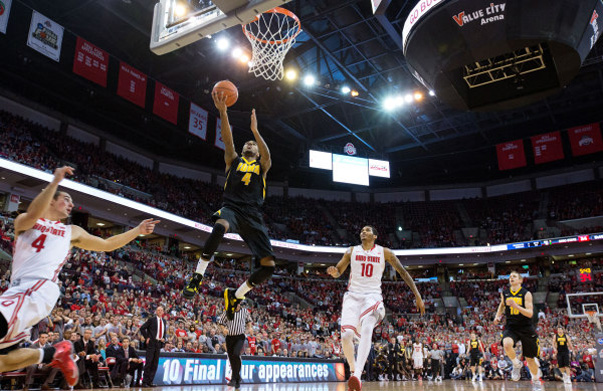 The Inside the Hall Big Ten Power Rankings are back for another week as conference play is now in full swing. This week’s rankings feature a new No. 1 and a couple of teams that slid multiple spots after very unimpressive weeks. Check out where each team stands after the second week of league play.

12. Northwestern (8-9, 1-3) (LAST WEEK: 12) … Perhaps things are trending in the right direction in Evanston, after all. Despite a 26-point loss at Iowa on Thursday, the Wildcats hosted Illinois on Sunday night in Evanston and came away with a scrappy 49-43 upset victory, the first Big Ten win in the Chris Collins era. But let’s not get ahead of ourselves. The Wildcats still have losses against Illinois State, DePaul and North Carolina State outside of conference play and in their first four Big Ten games are at a -17.5 scoring margin. (Up next: Jan. 15 vs. Michigan State, Jan. 18 at Indiana)

11. Penn State (9-8, 0-4) (LAST WEEK: 11) … If there is one theme emerging with Penn State’s season, it has to be that the Nittany Lions cannot finish off opponents. Twice this past week the Nittany Lions had large leads at home — eight points against Minnesota and 15 points against Indiana — and both times, they lost. The same thing happened the week before against Michigan State. Especially in the Big Ten, where road wins are so hard to come by, the fact that Penn State can’t even win its home games is extremely alarming. (Up next: Jan. 14 at Michigan, Jan. 18 at Purdue)

10. Nebraska (8-8, 0-4) (LAST WEEK: 10) … Much like Penn State, the Cornhuskers simply could not pull out a victory this past week, losing by one point at home to Michigan and then losing on the road by six to Purdue on Sunday. Tim Miles has his team competitive for 40 minutes, at least, but being competitive isn’t enough in what is one of the toughest conferences in the country. (No games this week)

9. Purdue (11-5, 1-2) (LAST WEEK: 8) … Despite an entire week to prepare for a game with Nebraska at home on Sunday, a team winless in the Big Ten, the Boilermakers really couldn’t put the Cornhuskers away until the final seconds of the game. Still, it was enough to earn Matt Painter and crew its first conference victory of the season, but was it an impressive win? Not necessarily. (Up next: Jan. 15 at Illinois, Jan. 18 vs. Penn State)

8. Indiana (11-5, 1-2) (LAST WEEK: 9) … Any time you can go on the road in the Big Ten and come away with a victory, it’s a good sign. The Hoosiers did just that on Saturday in State College against Penn State, a 79-76 win. Yes, they trailed by 15 points in the first half and had to hope the Nittany Lions would miss the final shot at the buzzer (they did), but regardless, the Hoosiers emerged with a victory in conference play. After an 0-2 start to Big Ten play, getting into the win column is important enough. (Up next: Jan. 14 vs. Wisconsin, Jan. 18 vs. Northwestern)

7. Illinois (13-4, 2-2) (LAST WEEK: 4) … What a disastrous week it was for the Illini. After they started the conference season 2-0, they went into Madison on Wednesday ranked against undefeated Wisconsin. They lost by 25 points. And on Sunday, against a winless Northwestern squad in Big Ten play, the Illini scored a whopping 43 points en route to their second straight loss. (Up next: Jan. 15 vs. Purdue, Jan. 18 vs. Michigan State)

6. Minnesota (13-4, 2-2) (LAST WEEK: 7) … The Golden Gophers had a pretty successful week, overall, going into State College and emerging with a victory at Penn State and then forcing Michigan State into overtime in East Lansing despite giving up the lead late. It’s certainly something that Richard Pitino can build on, as his team will have an opportunity on Thursday in Minneapolis, and in front of a national audience on ESPN2, to topple a vulnerable Ohio State squad. (Up next: Jan. 16 vs. Ohio State, Jan. 19 at Iowa)

5. Michigan (11-4, 3-0) (LAST WEEK: 6) … Remember, any Big Ten win on the road is a good one. In what was a back-and-forth battle at Nebraska on Thursday, the Wolverines emerged victorious, 71-70, thanks to a Derrick Walton Jr. jumper with 21 seconds left. Though perhaps their first three conference games haven’t been against top-tier opponents (and Penn State is up next), two of the wins have come on the road and the Wolverines are one of only three undefeated teams in league play. (Up next: Jan. 14 vs. Penn State, Jan. 18 at Wisconsin)

4. Ohio State (15-2, 2-2) (LAST WEEK: 1) … This past week was one in which the Buckeyes were quickly grounded after a 15-0 start. They certainly battled Michigan State in East Lansing and nearly topped the Spartans on the road, but they didn’t. And then on Sunday, at home against Iowa, the Hawkeyes came into Value City Arena and pulled away late. The Buckeyes just couldn’t find the offense to match the Hawkeyes and turned the ball over four times in the final 4:31 while shooting 3-for-7 from the field and going 2-for-4 from the free throw line. The result? A 10-point loss and a two-game losing streak. (Up next: Jan. 16 at. Minnesota)

3. Iowa (14-3, 3-1) (LAST WEEK: 5) … There is no other way to put it: Sunday’s win at Ohio State was a signature win for the Hawkeyes. They overcame a nine-point deficit in the second half and simply outplayed the Buckeyes down the stretch in Columbus. It’s rare the Buckeyes lose in Value City Arena — let alone by double digits — but the Hawkeyes made that happen. Not to mention, they had a 93-67 win against Northwestern earlier in the week, only four days after Fran McCaffery’s tirade at Wisconsin forced the coach to be suspended for the game against the Wildcats. (Up next: Jan. 19 vs. Minnesota)

2. Michigan State (15-1, 4-0) (LAST WEEK: 3) … The Spartans move up in the power rankings this week after two wins at home, but neither one came easy. Against Ohio State, the Spartans blew a 14-point lead with 5:18 left and escaped with a four-point win in overtime, and then on Saturday against Minnesota, they couldn’t close out a five-point lead with 22 seconds left before blowing the Golden Gophers out, 16-4, in overtime. The point is, though the Spartans remain undefeated in Big Ten play, they certainly appeared vulnerable at home this past week. (Up next: Jan. 15 at Northwestern, Jan. 18 at Illinois)

1. Wisconsin (16-0, 3-0) (LAST WEEK: 2) … Well, only four undefeated teams remain in the country. Wisconsin is one of those teams (Syracuse, Wichita State and Arizona are the others). The Badgers took care of business at home against Illinois on Wednesday — a 95-70 victory — and their 16-0 start is the best in school history. And by avoiding road games against Michigan State and Ohio State this season, the Badgers have become the early favorites to win the Big Ten. (Up next: Jan. 14 at Indiana, Jan. 18 vs. Michigan)