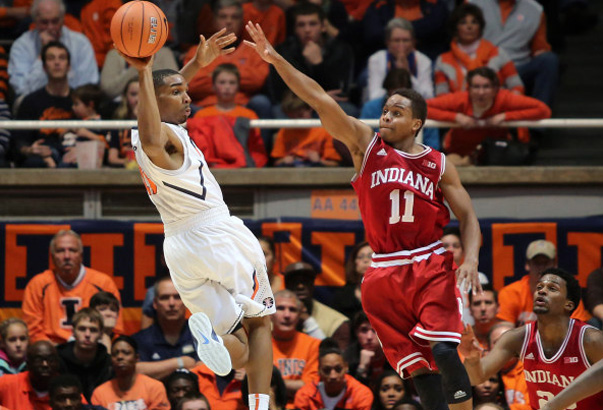 Time and time again on Tuesday afternoon, Indiana had chances to pull off a win at Illinois, despite how ugly the game had truly been.

The Hoosiers turned the ball over a season-high 23 times against the Illini and shot a mere 38.2 percent on 2-point attempts, but when it came down to the pivotal moments of an eventual overtime Big Ten opener in Champaign, the Hoosiers had chances to get the win in both regulation and the extra period. It didn’t happen.

As has been the theme in big moments for Indiana this season — such as in the final seconds against Connecticut and Notre Dame — the Hoosiers were unable to capitalize on the opportunity. The end result: an 83-80 loss that dropped the Hoosiers to a 10-4 record heading into Saturday’s matchup at Assembly Hall with No. 5 Michigan State.

“It’s just going to take time for us to understand everything matters, every part of it matters,” Indiana coach Tom Crean said following the game. “We did do some things, obviously, that we’d like to have back.”

Much of the Hoosiers’ misfortunes at the end of the game were epitomized in their final possession of regulation after freshman Noah Vonleh blocked a Rayvonte Rice shot with 26 seconds left and the game tied at 71. The Hoosiers had not made a field goal since the 6:44 mark, and when sophomore Yogi Ferrell brought the ball up-court, senior Evan Gordon called a play of his own.

Gordon received the ball at the top of the key with about 16 seconds remaining and held it to the final shot, as he drove to the right baseline, shot-faked and then put up the shot just before the final buzzer. The shot was short. Indiana had missed its first opportunity.

“Evan made a call and we were all fine with it, so he got it,” Ferrell said. “And you know, we thought the shot looked good, it was just a little short.”

As the overtime period ensued, Indiana’s struggles continued, as the team shot 0-for-7 from the field before making its first shot with only four seconds left. But the Hoosiers got to the line and the Illini (12-2) missed shots. Indiana, somehow, was still in the game.

And when Joseph Bertrand missed a free throw with 30 seconds left and the score 78-75 Illinois, Vonleh got a rebound that could put the Hoosiers back in the game. Except Illinois’ Jon Ekey stole the ball from behind Vonleh. Again, a missed opportunity for the Hoosiers.

“When I caught it, I looked quick, I saw Will (Sheehey) and I didn’t see the guy coming,” Vonleh said. “He came in there and just took the pass away. I’ve just got to be more aware next time.”

The final blow came with 12 seconds left in the overtime period, when Ferrell drove to the basket and was unable to convert at the rim. Illinois rebounded the miss and Indiana fouled, as Tracy Abrams made one free throw to put the Illini up four with eight seconds left. By then, the game was out of reach.

Yes, Ferrell would go on to make a 3-pointer that would draw Indiana to within one point with 3.1 seconds left (Indiana’s first basket in 11:41 of game time), but it was too late for the Hoosiers to win at that point. Despite the amount of opportunities they had, they simply couldn’t capitalize on Tuesday.

After the game, Crean didn’t avoid the fact that his team has a turnover issue at the moment. Especially now that the Hoosiers have 63 in their past three games, including a season-high 23 in Tuesday’s loss in Champaign.

On Tuesday, they came in bunches. From errant passes to offensive fouls to traveling violations to shot-clock violations to five-second violations, Indiana once again struggled in the turnover battle. In contrast, Illinois only had 10 turnovers.

“I think we all know that we have some turnover issues,” Crean said. “I think we’re trying to correct those. I think we just lost that game by three points. And I thought that we had some costly turnovers in the game.

As the season goes on, the Hoosiers know the problem will have to be fixed. They no longer can afford to play sloppy and expect to win in the Big Ten.

“It’s just (making) smart plays,” Ferrell said. “I feel like a lot of us, even myself, we think plays are there but they’re not really there. So it just goes back to watching our turnovers on film..”

Ferrell has career-best performance in Champaign

One of the bright spots that came out of the Hoosiers’ performance came from Ferrell, as the sophomore point guard once again showed the value he has to the team.

For the fifth time in the past six games, the Indianapolis native shot an effective field goal percentage of over 50 percent. Ferrell poured in a career-high 30 point performance off five 3-pointers, four 2-pointers and seven free throws in 43 minutes of action. He was the first Hoosier to score 30 since Christian Watford did it against Iowa in 2011.

As much as he had a career-performance in shooting and scoring, though, Ferrell also provided the Hoosiers with five rebounds and four assists on the afternoon.

Ferrell is now shooting 44.4 percent from beyond the arc and averaging 17.7 points, 14 games into the new season. The last player to average that many for the Hoosiers? Eric Gordon in 2007-2008, when the freshman scored an average 20.9 points per game.

Crean said he would have liked for Howard to start against Illinois but that he isn’t 100 percent healthy. He played a total of less than one minute against the Illini.

Hollowell, meanwhile, was injured in the second half, according to Crean, and did not play much of the rest of the game after going 0-for-6 from the field.

Indiana is already lacking front-court depth after the loss of freshman Luke Fischer, and the health of Hollowell and Howard will hold more importance than usual as the season goes on.