Hoosiers zero in on Bader, Mondy of Oakland 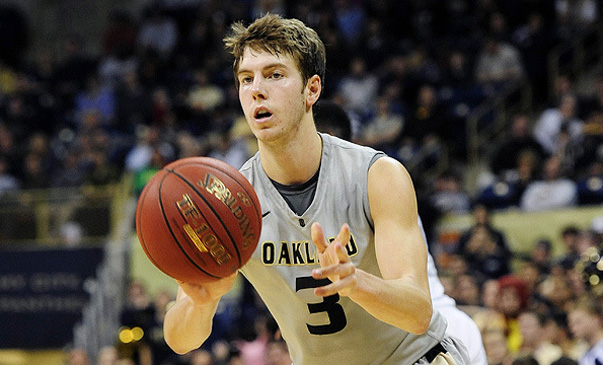 When Indiana coach Tom Crean saw that tonight’s game against Oakland (2-7) at 7 p.m. would be broadcast nationally on ESPN2, he immediately knew why.

“They’ve got some high-level players,” he said at his pre-game press conference Monday afternoon. “That’s one of the reasons that ESPN chose this as a game for us. They want something that’s going to draw some attention.”

Yes, the Golden Grizzlies started the season with seven straight losses, but they have also won two straight games, most recently coming against a then 6-1 Ohio team on Saturday. And leading the pack for Oakland are two national leaders in statistical categories: senior Travis Bader leads the country in made 3-pointers per game, and senior Duke Mondy tops the nation in steal percentage.

Those two players have Indiana’s attention heading into tonight’s game, and the Hoosiers know they are in for a challenge with each of them.

“Every player has certain traits that they want, in this game, to get to,” Crean said, “and you’ve got to do a great job of doing your best not to let them get to those.”

With Bader, the Hoosiers simply want to limit his touches. The 6-foot-5 Okemos, Mich., native averages 10.9 3-point attempts per game, and more than 40 percent of those shots go in. At 4.4 makes per game, he ranks No. 1 in the country in the category and also is No. 12 in the all-time NCAA career makes list with 397.

“He’s only a threat every time he has it,” Crean said. “He’s one of those guys where if you relax for a second, it’s going up.”

But stopping Bader is much easier said than done.

Sophomore Yogi Ferrell compared his shot to that of Syracuse’s Trevor Cooney in the sense of how Bader can shoot very quickly and off either foot. Crean noted how Bader “never stops moving,” how he “knows how to set you up” and how the Hoosiers cannot afford to lose him on the court.

Though his players might not necessarily understand the comparison, Crean said Bader is even similar to former Ohio State player Jon Diebler, who was a special matchup in himself.

“There’s going to be no hair space when we are guarding him because he can fire from NBA range or anywhere,” Ferrell said. “We’ve just got to limit his touches. And that’s going to be our key, especially defensively and in transition, is limiting his touches and taking away their outlets.”

“We’re going to have our hands full, defensively,” sophomore Jeremy Hollowell said. “We can’t get them lost in transition. We have to really do a good job with that.”

Figuring out Oakland’s offense is only one half of the puzzle. Led by Mondy, who averages 4.2 steals per game, Indiana is also concerned with the Grizzlies’ defense. Crean said Oakland operates out of a 1-1-3 zone that can work as a 2-3 or 1-3-1, like somewhat of an “amoeba.”

“The bottom line is it’s very active and aggressive,” Crean said. “They create a lot of steals and turnovers, and when you’ve got a couple of national leaders like they have with Duke Mondy in the steals department and then Travis Bader in the 3-point department, you have be very cognizant of that.”

With Mondy, a 6-foot-4 Providence transfer, his 7.2 percent steal rate has Crean’s attention.

He has quick hands, he’s fearless, he’s very active on defense and knows when to put his hands up. In fact, Crean likened him to a football player on defense, as he sees an ability to coil the ball and simply take it away from someone.

“He’s fearless when it comes to absolutely going after the ball,” Crean said. “Much like Victor (Oladipo) became last year. The older Victor became just fantastic at taking the ball from people. Mondy reminds me a lot of that.”

As Indiana has realized in its first nine games, though, many of the keys to the game lie in its own hands. When the Hoosiers stray from the game plan — such as in the second half against Syracuse — disaster strikes.

Whether they can stop Oakland tonight might come down to a matter of execution.

After he re-aggravated a sprained ankle on Saturday that he originally sustained at Syracuse, freshman Devin Davis is considered a game-time decision for tonight’s game. That said, Crean is “doubtful” he will play, though Davis has undergone “triple sessions” of rehabilitation for the injury.

“That’ll become Tim (Garl)’s call and the doctor’s call, but I’m not holding out hope that we’ll have him tomorrow,” Crean said. “You go day-by-day based off what it is.”

In nine games this year, Davis is playing about 11 minutes per game and is averaging 3.4 points and 4.4 rebounds.