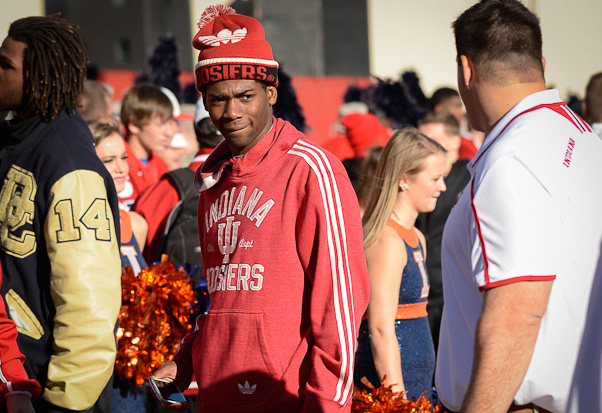 Class of 2014 Richmond Benedictine (Va.) guard Robert Johnson was in Bloomington over the weekend for IU basketball’s season opening win over Chicago State and IU football’s win over Illinois.

Inside the Hall spoke to the future Hoosier on Sunday evening to get a recap of his trip, discuss his plans for signing day and more:

On the takeaways from the weekend in Bloomington:

“I think experiencing my first game (at Assembly Hall) was good. The atmosphere was crazy as I expected so I was excited to see that. I think the game went pretty well. Some of the things that you think would happen with a young team happened. They had more turnovers than coach (Tom) Crean would have liked. Some of the time they got out of what they really wanted to do, but at times also they had real good spurts, too. One of the things that he pointed out was that they scored 100 points and only made one 3. Obviously that’s something he pointed out and said that I can help with. That’s one of the biggest things that I took away from the game.”

On playing with James Blackmon Jr.:

“I think it’s definitely going to be fun because we both offer something that they need right now and there’s a lot of playing time at the guard positions. I think coming in with him is going to be fun because we’re interchangeable because he can play on the ball and I can play off the ball and at the same time, when I have the ball also, people can’t really help off of him because he’s a shooter and when he has the ball, people can’t really help because I’m a shooter. So it will just open the floor up for the whole team.”

On Indiana’s style of play and how he fits in:

“I’m real excited to have that freedom because that’s one of the things that separated Indiana from a lot of schools was the style of play. They like to get up and down and have the athletes to do that. Being able to do that, at the same time, there’s a lot of responsibilities that come with it as far as taking care of the ball and making all of the right plays. I think when you get out and run like that, everybody has a chance to have the ball and has a chance to score, so it’s fun.”

On what the Indiana coaches would like to see him work on:

“Coach Crean had told me a couple of things about the pick and roll that he wanted to see me working on. One of the main things that he said when he came last week was talking about pushing the ball out on the initial dribble. That’s something he said that I needed to make sure that I started to build a habit of doing is getting the ball out when I get it on the break. Other than that, he just showed me a couple of pick and roll things, but nothing that in-depth right now.”

On the outlook for his senior season at Benedictine:

“I expect to win. I think we have a good chance at repeating as state champions again. We’ve been practicing, but a couple of our main, key guys who are really good and big time athletes, they play football. Now that we have them back we can start building more on team concepts and things that like and get the ball rolling. I think we have a chance to be real good and I’m excited about the season.”

On his plans for the early signing period, which begins on Wednesday:

“I’m pretty sure I’ll be signing on Wednesday.”

On how tough the recruiting process was and how he feels now that it’s over:

“I think it was probably one of the toughest, if not the most tough, decisions that I ever made in my life just because of the simple fact that there was a lot of good coaches talking to me and basically telling me about their programs. But at the end of the day, when I thought about the things that I wanted, Indiana separated themselves from everybody else. I’m super relieved that the process is over and I don’t have to worry about it anymore and I can just go out there and play free and try to continue to get better so that once I get to college it will be an easier transition.”

On how Indiana was able to separate from the other schools involved in the process:

“The biggest thing I think was that every time I talked to coach Crean, he always talked about not how much he wanted me, but how much that they really, really needed me. I think there’s a difference between when somebody wants you and somebody really, really needs you because then they’re going to do everything in your best interest to make sure you get better because it not only is benefitting you, it is benefitting them also and benefitting the team. I think that was probably the biggest thing that separated Indiana.”