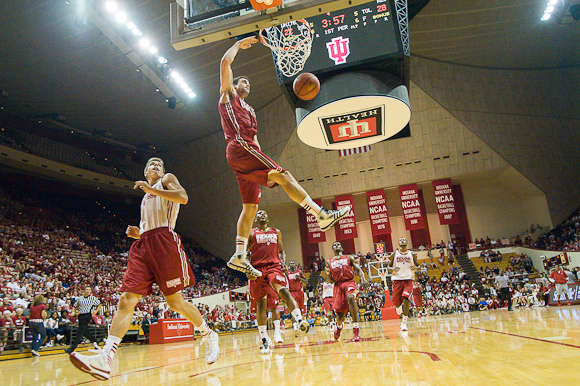 · The youth must come through: Yes, Will Sheehey and Yogi Ferrell both return and played starter’s minutes a season ago. And Evan Gordon arrives as a graduate senior with plenty of experience after stops at Liberty and Arizona State. But the reality beyond that is this: Indiana is very thin on experience. The Hoosiers have six freshman and three of their returning sophomores have played limited minutes. Peter Jurkin and Hanner Mosquera-Perea barely played a season ago and Jeremy Hollowell, who will be counted to shoulder a much bigger role, only averaged 9.7 minutes per game as a freshman. There will be bumps in the road early for this team, but the young talent is there to mold into a tough out come March.

· Injuries aren’t a major concern, yet: It wasn’t a surprise that Troy Williams and Luke Fischer were held out of Hoosier Hysteria. Williams is nearly back from a right hand injury and Fischer, who’s had tough luck all offseason in terms of staying healthy, is battling a shoulder injury that will keep him out a few more weeks. What we didn’t know is that Noah Vonleh is out with a mild ankle injury, which kept him out of the scrimmage portion of last night’s festivities. And then late in the scrimmage, Stanford Robinson went down with what Tom Crean described as a knee bruise. None of these injuries figure to linger on long enough to force anyone to miss significant time, but Indiana needs to get all four players back sooner rather than later with the season opener just over four weeks away.

· Hanner Mosquera-Perea is better, but how much better? It’s a question that we might not be able to answer until Indiana gets into the meat of its non-conference schedule, which begins when the Hoosiers face Stony Brook on Nov. 17. Athleticism has never been a problem for Mosquera-Perea, but the last time we saw him on the court prior to last night, he was a major work in progress. There were signs of encouragement on Friday for the sophomore forward. He was active around the basket in the scrimmage, scoring five points and grabbing two rebounds (unofficially). He also seemed far less timid than he played a season ago, which is a sign that he’s becoming more comfortable with the speed of the game. “We’re trying to get him to be that absolute pit bull that we recruited,” Crean said last night. “With that, for him to get that, I think he’s going to have to have great confidence, and that’s going to grow. That’s going to take time. He’s going to have to do it in games.”

· Sloppy play a slight concern in scrimmage: The first public scrimmage of the season will be long forgotten once the real games begin, but for now, what we watched last night is all we have to analyze. And turnovers were a problem. Unofficially, the two teams combined for 22 of them in 16 minutes. Some of it was the up and down nature of what was essentially a scrimmage you’d see in an open gym. But there were instances where the easy play wasn’t made and you can be sure that once Crean watches the film, those mistakes will be addressed. “I think the bottom line with this team, if I had to sum it up all the way across the board, we’ve got a lot of old habits to break and a lot of new habits to build,” Crean said. “And I have no idea what the timeline is going to be on that.”