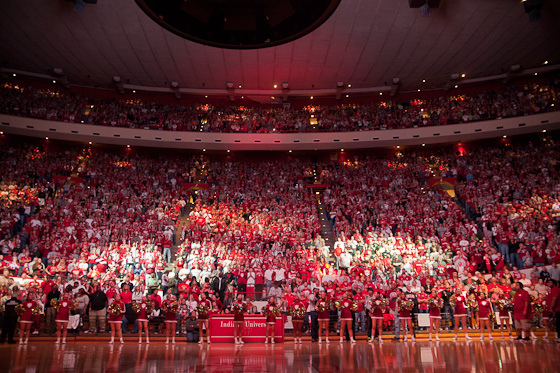 Starting at 2 p.m. on the south side of Assembly Hall, IU will provide a D.J., concessions and a video board showing highlights and games from last season. As has been previously reported, doors open at 5 p.m.

The IU women’s basketball team will hold practice from 5:30 to 6:30, with the main program featuring the men’s team beginning at 7:30.

After the event, players will sign autographs (one item per person) for an hour on the Assembly Hall concourse level.

The entire release from IU is posted below, which includes additional information on the day’s events:

Bloomington, Indiana – With just a week before Indiana University holds its annual Hoosier Hysteria presented by Smithville, more details are being finalized for the event which will be held at 7:30 p.m., Friday, October 4. Doors will open at 5 p.m.

Admission is free but fans are encouraged to bring a canned food item and donate it to Hoosier Hills Food Bank.

Beginning at 2 p.m. there will be a DJ, concessions and a video board showing highlights and games from last season on the south side outside of Assembly Hall.

The IU Varsity Shop and IU Athletics ticket office, located in the west lobby of Assembly Hall, will be open throughout the day. Fans are encouraged to purchase Mini-Series tickets are available to the general public after October 1, 2013 and will be on sale at Hoosier Hysteria. The package will include four home games highlighted by Big Ten rival Michigan State on Saturday, January 4, 2014. The package will also include tickets to the Evansville (11/26), Nicholls State (12/20) and Kennesaw State (12/22) contests.

The video board in Assembly Hall will have highlights, games from last year and basketball themed movies as time allows.

The program begins at 7:30 p.m. with team introductions, skill contests and a men’s scrimmage among the activities. There also will be contests for students and fans during breaks in the action.

The evening will conclude with the men’s team signing autographs on the concourse level of Assembly Hall for one hour following the end of the program. Fans may bring in one item per person to be signed by the players. The traditional IU men’s basketball calendars will be on sale that evening the Varsity Shop. A free autograph card will be available to those who do not have a personalized item for the players to sign.