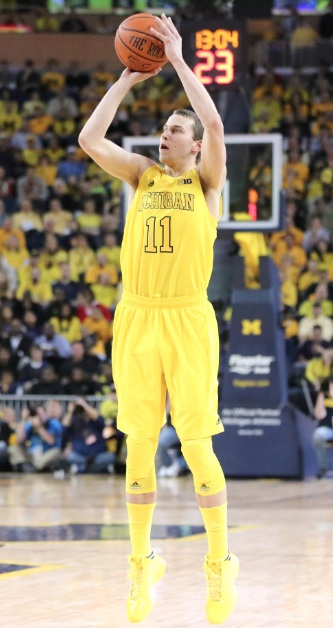 With the official start of practice less than five weeks away, Inside the Hall and UM Hoops have partnered to bring you a preseason breakdown of the top 25 players in the Big Ten for the 2013-2014 season.

Our selection process involved much deliberation to arrive at a list that we hope will provide plenty of reaction and debate. The series will be broken into five parts (25-21) and our second installment of players 20-16 is available below:

Newbill’s role took on a major shift just four games into last season when Penn State lost Tim Frazier for the season with a ruptured Achilles tendon. The transfer from Southern Miss instantly became a go-to scoring option for Pat Chambers as he used 30.9 percent of his team’s possessions, the highest usage for any Big Ten player. On a winning team, Newbill’s stats would have been good enough for All-Big Ten status, but Penn State finished in the league cellar. Efficiency wasn’t really Newbill’s calling card as he shot just 43.4 percent on 2-point field goals and a dismal 26.7 percent on 3-pointers. He did, however, draw 5.8 fouls per 40 minutes and posted an assist rate of 29.5, which was fourth among Big Ten players. As a redshirt junior, he’ll welcome Frazier back into the lineup and form what should be one of the league’s more potent backcourts.

As remarkable as Dawson’s speedy return from a torn ACL was, his production didn’t make the leap that many projected after a solid freshman campaign. Despite a rise in playing time by more than six per minutes per game, his overall numbers only took a modest leap and his shooting numbers were down across the board. He was also less effective on the offensive glass as his offensive rebounding percentage dropped from 13.3 percent as a freshman to 9.9 as a sophomore. His assignment on this list was one of our tougher tasks because of his unquestioned talent and upside, but the reality to this point in his career is that Dawson is an undersized forward who hasn’t proven he can shoot outside of ten feet.

Elite shooters are a commodity at any level of basketball and that’s exactly what Stauskas was last season at Michigan. Surrounded by two first round NBA Draft picks in Trey Burke and Tim Hardaway Jr. and two future first rounders in Glenn Robinson III and Mitch McGary, Stauskas hit 44 percent of his 3-pointers, which is exactly the role John Beilein needed him to fill. His 22 points against Florida in the NCAA Tournament helped push the Wolverines to their first Final Four appearance since 1993. As a sophomore, Stauskas will likely find himself with more opportunities in screening situations, where he scored 1.18 points per possession as a freshman. That was the highest of any Big Ten player with more than 25 attempts.

Despite a proclamation that Hammons could be a contender for Big Ten player of the year by ESPN college basketball analyst and radio host Dan Dakich, we’re not ready to cast the Purdue sophomore in that role just yet. Hammons had a very good freshman season as he ranked in the top ten in the conference in offensive rebounding percentage (11.6) and block percentage (8.7). But as dominant as Hammons was at times, he also had games where he either battled foul trouble or just wasn’t in the condition to play more than 20 minutes. The good news for Purdue fans is that Hammons has reportedly trimmed down even more. He was listed at 280 pounds last season and is now listed at 256 on Purdue’s official site, which makes him a candidate to outperform his spot on this list.

Iowa got another taste of the postseason last year under Fran McCaffery – albeit in the NIT – but the Hawkeyes look poised for the NCAA tournament this year and Marble is a big reason why. Marble led the Hawkeyes all the way to the NIT finals last season as he averaged averaged 20.6 points, 2.4 steals and four rebounds in five games. Iowa returns the core of its team, led by Aaron White and Marble. One of the strengths of his game is getting to the line as he posted a free throw rate of 44.0 percent last season and hit 81 percent from the line. The 3-point shot became a much bigger part of his offensive game as a junior as he took 150 shots from beyond the perimeter, where he hit just 32.7 percent. As a senior, Marble may be best served to become a little more selective offensively, especially on the perimeter, and look to distribute more (22.4 assist rate as a junior).