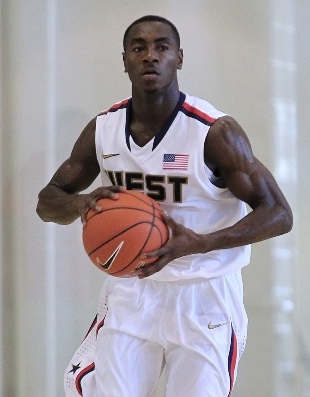 LouRawls Nairn, a 2014 point guard from Bel Aire, Kansas, narrowed his list to Indiana, Minnesota and Oklahoma on Tuesday.

Nairn also scheduled official visits to all three of his finalists, with a trip to Bloomington set for Sept. 20-21. The Indiana football team will play Missouri that weekend.

Nairn, who stands just 5-foot-10, is ranked 61st in the 2014 class, according to Rivals.com. He is unranked by both ESPN.com and Scout.com.

“Indiana is a great program with big time basketball and a great coach,” Nairn told Inside the Hall on Tuesday.

Nairn told Inside the Hall he talks to the Indiana coaching staff 1-2 times per week.

One of the factors in his college decision, however, is being able to step in and play right away. That may prove difficult at Indiana with Yogi Ferrell firmly in control of the starting point guard job.

Nairn becomes the fourth guard to plan a visit to Indiana in the next two months. Class of 2014 combo guard Robert Johnson will take an official visit the weekend of Aug. 24 along with 2015 wing Malachi Richardson.

Isaiah Whitehead, a class of 2014 shooting guard from New York, will be on campus in September.