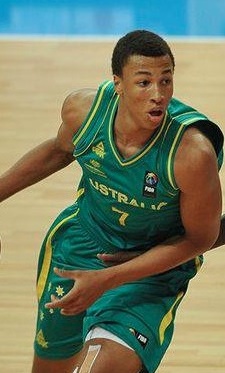 Class of 2014 guard Dante Exum, who missed last month’s adidas EuroCamp with a stress fracture in his left leg, is back on the court for Australia in the 2013 FIBA U19 World Championships in Prague, Czech Republic.

Through five games in Prague, the 6-foot-6 combo guard is playing well and averaging 12.4 points, 3.2 rebounds and 3.0 assists per game. Exum is shooting 40 percent on threes and had 20 points in an 88-79 win over China.

Australia is just 2-3 through five games and lost to Team USA, 94-51, on Tuesday. Exum finished with seven points and four rebounds but played limited minutes in the loss because of a tweaked ankle.

He’s expected to play today as Australia takes on Russia.

Exum, who is considered one of the top players in the 2014 class, took an official visit to Bloomington last winter and was in attendance for Indiana’s 88-81 win over Minnesota at Assembly Hall.

Victor Oladipo going No. 2 to Orlando and Cody Zeller going No. 4 to Charlotte may not bear immediate fruit when it comes to recruiting, but Indiana coach Tom Crean acknowledged the draft’s impact on the program on a conference call last Friday.

“I think it just brings a different dose of energy. I think this program has a lot of energy anyways,” Crean said. “It’s one of the things we’re built on. There is no question it brings more energy.”

Heading into a critical month for recruiting — July has three NCAA evaluation periods — Crean said the staff no longer has to sell the program as potentially being great in the future.

World University Games to be broadcast by ESPNU

Indiana fans will have a chance to catch sophomore Yogi Ferrell and senior Will Sheehey in this month’s World University Games in Kazan, Russia. ESPNU is scheduled to broadcast several games either live or on tape delay.

The team arrived in Kazan early Wednesday morning local time and will practice for four days, including a pair of scrimmages on July 4 against Russian basketball club UNICS and on July 5 against the Russia World University Games Team.

The World University Games begin on July 7. The United States is looking for its first gold in the event since 2005.