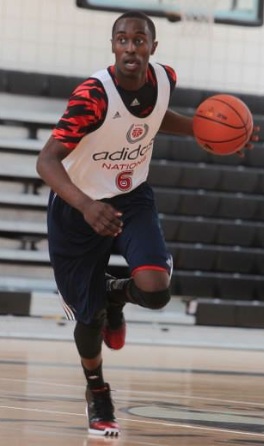 In the end, the chance to play close to home for one of the nation’s top programs was too much for Theo Pinson to turn down.

The class of 2014 wing, rated a consensus five-star prospect, ended his recruitment on Wednesday with a verbal commitment to North Carolina.

Pinson announced his decision at his high school, Wesleyan Christian Academy, in High Point, North Carolina. He was heavily recruited by Indiana and also considered Duke, Georgetown and Louisville.

Indiana offered Pinson in May of 2012 and hosted him on an unofficial visit last June and for an official visit in early February for a primetime game against No. 1 Michigan on ESPN’s College GameDay.

The Indiana staff also attended the final three games of his high school season when he led Wesleyan Christian to its first state championship in 20 years and many of his games this spring for the CP3 All-Stars in the Nike Elite Youth Basketball League (EYBL).

As recently as May 11, Pinson told Inside the Hall that the Hoosiers were “looking good” in his recruitment and that he planned to trim down his list in the coming weeks.

But his timeline accelerated as he decided late last week that he was ready to end the process.

The Hoosiers have one verbal commitment in the 2014 class — James Blackmon Jr. — but are well positioned with several top players including Dante Exum and Goodluck Okonoboh.

Video of Pinson talking about his decision after the jump.