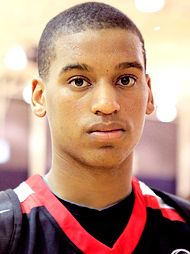 At last weekend’s Hensley Memorial Spiece Run-N-Slam Classic in Fort Wayne, Bluiett listed Butler, Michigan, Indiana, Purdue, Depaul and Cincinnati as the schools that he felt had made him a priority, in that order.

He wouldn’t admit to listing any schools ahead of others, but his father believes he has some idea.

“I think he has an idea,” said Reynardo Bluiett, who is also Trevon’s AAU coach for Spiece Indy Heat. “I don’t ask him because I’m not prepared to know. He’s got an idea.”

“What he sends me is really just quotes, just encouraging quotes and stuff like that,” said Bluiett, who is ranked 45th in the 2014 class, according to ESPN.com. “Sometimes he’ll write me and say, ‘Good game last week’ or stuff like that. He and Butler are the only ones that hand write me. That means a lot because most people would type it up on the computer and switch the heading at the top.”

Added Reynardo Bluiett: “That means a lot. As a kid, that’s gotta have some push for you. And it’s deep stuff. Buckley’s a pretty deep guy. I get a joy out of reading his quotes and facts as well.”

Bluiett said Indiana continues to contact him about twice a week, and he also regularly hears from former high school teammate Yogi Ferrell, who just finished his freshman year at Indiana.

“It helps a lot,” Bluiett said of having Ferrell at Indiana. “It helps me mentally and physically. He tells me how the workouts are. I just prepare myself for that.”

“Going from the Horizon with just a few teams to the Big East where every game is a good game, it means a lot,” Bluiett said. “When you get into conference, you want every game to be close, at least that’s the kind of games I would want. It makes a difference, but I have to see if it’s the right fit for me.”

UCLA has also become involved in Bluiett’s recruitment, largely because his former Park Tudor coach, Ed Schilling, now works on Steve Alford’s staff for the Bruins. But at last weekend’s Spiece tournament, Bluiett sort of shot down the idea that Schilling would have a bigger impact on his recruitment than any other coach.

“It changes it a little bit,” Bluiett said. “He’s been my mentor since sixth grade so that definitely means a lot. He’s like a second dad to me, so that definitely goes a long way. I love playing for him and all that kind of stuff.

“I just look at him like another coach. I can’t be biased toward his side. I’m happy for him that he got the job, but at the same time it’s a business for he and I. I can’t treat him different than the other college coaches because that’s just not fair.”

Bluiett’s schedule has been so busy lately that he and his family haven’t yet had time to sit down and discuss where he stands with the number of schools who have offered him, which has eclipsed 15. Reynardo Bluiett said that will happen soon, though, and once it does, Trevon will trim his list and begin to schedule official visits.

“We did want to sit down and put things on paper after this first group of tournaments,” Reynardo Bluiett told Inside the Hall. “He’s still getting offers, and we haven’t even sat down as a family. It’s kind of difficult. We just want to make sure we do it right.

“I don’t see this dragging out to the fall at all. When we get in it, we’re gonna be pretty quick to what we want to do.”

Bluiett said he would like to make a decision before he starts his senior year in the fall, if at all possible.