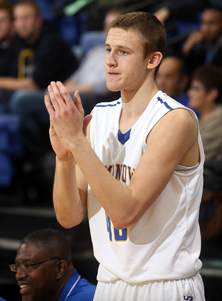 At last month’s Derby Festival Basketball Classic in Louisville, 2013 Germantown (Wis.) forward and Indiana signee Luke Fischer said he wasn’t concerned about where he fell in the national rankings.

“It doesn’t really bother me that much at all. I really don’t care about rankings,” he told Inside the Hall. “They don’t really mean much to me. I’ve just always gone out there and played and have done my own thing.”

But one of the three major services, ESPN, took notice of Fischer’s production as a senior and gave him a major bump in its final 2013 rankings that were released on Wednesday.

Indiana’s class ranks No. 4 nationally behind Kentucky, Kansas and Memphis.

With the passing of the NBA’s early entry deadline for the draft on April 30, several publications have updated their mock drafts and Indiana junior Victor Oladipo and sophomore Cody Zeller are unanimously in the lottery.

Here’s a look at where each player is currently projected:

· The Sporting News mentions Indiana as a program that could be included in a college basketball kickoff event in Dallas.

· Both CBSSports.com and ESPN.com list IU sophomore Yogi Ferrell as honorable mention on their lists for All-Americans next season.

· 2014 recruiting target Theo Pinson is looking to trim his list of schools this month, according to Jeff Borzello of CBSSports.com.

· Christian Watford tells Dustin Dopirak of The Herald-Times that he’s confident he’ll be selected in next month’s NBA Draft and has hired Joel Bell of Bell Management International as his agent. (Link requires subscription)

· The Des Moines Register takes an early stab at handicapping next season’s Big Ten race and slots Indiana in at No. 6.