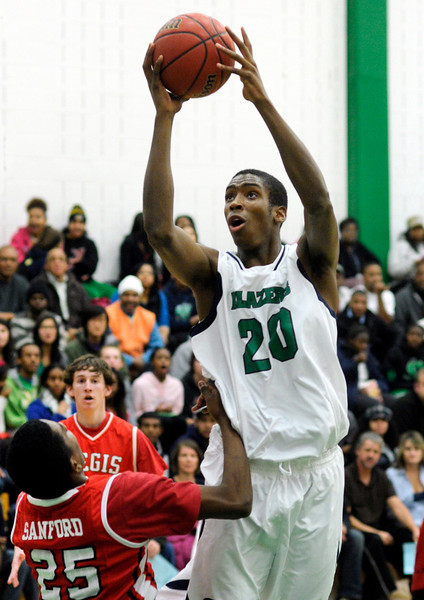 It didn’t take long for Indiana to notice De’Ron Davis.

The Hoosiers were the first to offer Davis a scholarship last July, and it’s safe to say he’s an early priority for Indiana in the 2016 class.

Associate head coach Steve McClain was in Denver to watch Davis play with his Colorado Hawks 16-under team on Friday at the Mile High Classic, and Davis noticed. The Hawks fell in Sunday’s championship game by four points.

It was the second straight weekend McClain watched Davis as the Hawks were in Dallas for the adidas Exclusive Run for the first April evaluation period.

“I’m very interested in them,” Davis, who plays at Overland High School, told Inside the Hall on Sunday night. “It was pretty exciting to see them there. It’s cool to have them after me.

“Indiana was my first offer. It does mean a lot, but right now I’m not really focused on any of my offers or schools that are on me right now just because I have a long journey and I’m trying to stay focused on the task at hand.”

Davis, a 6-foot-8, 220-pound forward, is one of the top ranked rising sophomores nationally and has continued to develop his game.

He provided Inside the Hall a brief summary and analysis of his playing style for those who haven’t seen him play.

“I’m an all-around big man,” Davis, who will turn 17 in November, said. “I can shoot, dribble, I can pass. I do think I have to work on my motor and trying to stay in the whole game instead of coming out at certain points or key points in the game. And ball handling is another thing I could probably get a little better at.

“But I like how I’m an all-around player. Most people think big men can’t play on the wings or do a lot of the stuff that I can do.”

Davis said throughout his school season this year and early in the AAU season he has drawn double and triple teams in the post, comparable to what Cody Zeller saw when he was at Indiana. Davis said he is getting much better with his perimeter shot and wants that to be a major part of his game going forward.

Davis admitted he doesn’t know much about the Indiana program at this point, but he’s noticed the attention the Hoosiers coaching staff has paid to him in the last year.