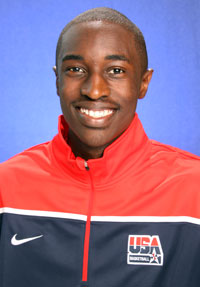 Theo Pinson, a 2014 recruit from Greensboro, North Carolina remains “very high” on Indiana and currently has the Hoosiers in his top three schools, according to his father, Theo Pinson Sr.

“Yeah, they definitely would,” Pinson Sr. said of Indiana being in the top three. “He likes them. They’re up there right now.”

Pinson is ranked 13th in the 2014 class by ESPN.com and also has offers from Duke, Florida State, Georgetown, Kentucky, Louisville, Memphis, North Carolina and Ohio State. The Hoosiers offered a scholarship last May and have recruited Pinson diligently ever since.

Pinson Sr. said he son will likely make his college decision sometime in the fall.

“With school and AAU starting up, we don’t really have time for much else right now,” Pinson Sr. told Inside the Hall. “He’s just focusing on that for now.”

Pinson, a 6-foot-6 forward, attends Wesleyan Christian Academy in High Point, North Carolina. He already made an official visit to Indiana the weekend of the Michigan game that was featured on ESPN’s College GameDay in February. It was his second trip to Bloomington after making an unofficial in the summer of 2012.

He doesn’t currently have any other visits scheduled and likely won’t take anymore until the fall.

“It was great,” Pinson Sr. said of the official visit to IU. “It was the Michigan game. It don’t get too much better than that. It was awesome.”

As a junior, Pinson led Wesleyan Christian to its first state championship in 20 years, capturing the NCISAA 3A crown with a 59-49 win over Greensboro Day.

Tom Crean and assistant coach Kenny Johnson tracked Pinson heavily throughout his run to the state title. Johnson watched both the quarterfinals and semifinals and Crean joined him for the title game.

Pinson will start his AAU season this weekend with the CP3 All-Stars at Nike’s EYBL session one in Los Angeles. Both Crean and Johnson are expected to attend.