Indiana will open the NCAA Tournament against the winner of LIU Brooklyn and James Madison about 139 miles from Bloomington on Friday at the University of Dayton Arena.

The Hoosiers will tip at approximately 4:10 p.m. ET on TBS with Jim Nantz, Clark Kellogg and Tracy Wolfson on the call. The game is part of Friday’s first session ticket.

If IU advances past Friday, it will face the winner of No. 8 North Carolina State and No. 9 Temple. The winner of that game will advance to the Sweet 16 in the tournament’s East regional at the Verizon Center in Washington D.C.

We’ve put together a list of this week’s schedule, including open practices and other tip times in Dayton, as well as ticket information after the jump.

SESSION 3:
· Times to be announced

A complete television schedule for the opening rounds of the NCAA tournament is available here.

Streaming Information:
· All NCAA tournament broadcast will be available over the internet at NCAA.com/MMOD and on the NCAA March Madness app on the iPhone, iPad, iPod and select Android devices. 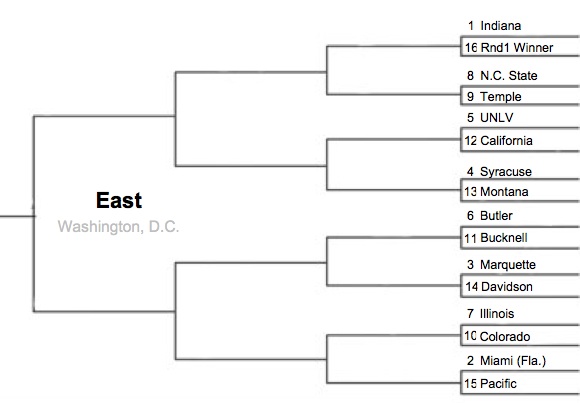